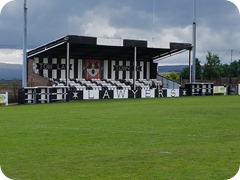 Tow Law Town Association Football Club is an English non-league football club from Tow Law, County Durham, currently playing in the Northern League Division Two, in the tenth level of the English football league system. The team, nicknamed "The Lawyers", play their home games at Ironworks Road. The club's fans are known as "The Misfits".

The club was founded in 1890 as Tow Law F.C., before adding the Town to their name in 1905, and throughout their history they have played in a number of local leagues including the Auckland and District League, the South Durham Alliance and the Crook and District League, before joining the Northern League in 1920. They have won the Northern League's Division Two twice—in 1988 and 1992—and its Division One on three occasions—in 1924, 1925 and 1995—but they have never been promoted or demoted from the Northern League since joining it more than 90 years ago.

In the 1967–68 season, the club had their best ever run in the FA Cup. After reaching the first round proper, they beat Mansfield Town 5–1 at Ironworks Road, and took Shrewsbury Town to a second round replay after a 1–1 draw at home. The team went into the third round draw and were drawn against Arsenal at home. However this never happened because they were beaten 6–2 by Shrewsbury in the replay. Arsenal were said to be "saved from a fate worse than death – a trip to Tow Law in January. In the summer of 1978, Chris Waddle started playing for the club. In the summer of 1980, while Waddle was working in a sausage factory, he was sold to Newcastle United for the fee of £1,000. Tow Law reached the final of the FA Vase in 1998, having progressed all the way from the first round, but were beaten by Tiverton Town in the final at Wembley Stadium.

The highest attendance figure recorded at Ironworks Road came when the team played Mansfield Town in the FA Cup first round in the 1967–68 season in front of a crowd of 5,500 people. 'The Lawyers' have been in the Northern League since 1920 and have played at Ironworks Road since the late 19th Century,their ground was built by volunteers during the mining strike in 1892/93.The ground features a main stand decked out in the clubs colours of black and white stripes,there is also a covered terrace behind the goal, The pitch is sloped across from one side to another 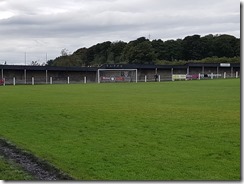 The day began with the intention of going to Darlington 1883 after spending time at Gateshead in the Metro Centre we had spent a little too much time and decided to abandon Darlington and go to Tow Law. We got there for KO with 5 minutes to spare and parked right outside the turnstiles. The ground is easily signposted off the A68. 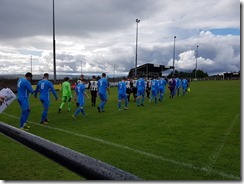 Tow Law won this game in a 5 goal thriller they coasted into a 2 goal lead with goals from Adam Nicholls and Lewis Teasdale and that was after only 8 Minutes. Town Law had various chances to build on that 2 goal advantage but some fine goalkeeping and wasteful finishing kept the score down. With the H/T whistle about to go with the score at 2-0 just before the whistle went Crook were awarded a free kick and Chris Emms curled the kick into the goal to take the game into half time 2-1 to the hosts. After the half time interval Crook levelled things up when a Dale Elgie shot was deflected into the net. Tow law continued to push for a winner but again fine goalkeeping kept the scores level, but with 5 Minutes remaining from a corner that was cleared Dean Thexton fired in a shot finally beating the Crook goalkeeper to set up a tie with Penrith in the next round. after the game it was a simple trip up the A68 to Corbridge where I joined the A69 back to Carlisle 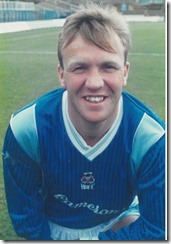 There were no players in either side that had played for Carlisle that I could see but listed on the Tow Law Coaching staff was Kevin Dixon who signed for Carlisle from Tow Law ahead of the 1983-84 season. He signed a 2 year deal and started 4 out of the 1st 6 games but the club and Kevin failed to score in the 1st 4 games and he was eventually dropped and sent to Hartlepool on loan for 2 Months scoring 3 goals in 6 Appearances. He was back at Carlisle towards the end of the season but still failed to score in a total of 10 Appearances. Carlisle Went on to finish 7th in the old Second Division only missing out on Promotion to the 1st division after a late season slump failing to win any of the last 10 games. Kevin went onto to join Hartlepool Permanently the following season and make 107 Appearances for Hartlepool scoring 26 Goals, before joining Scunthorpe, York, Scarborough, Newcastle Blue Star and Gateshead

In 2002 Carlisle United signed a young 20 Year old called Brian Wake from Tow Law Town. He joined Carlisle United on the 5th of December 2001, from  Tow Law Town, signing a 3 year contract. He was tracked by many other clubs after scoring 50 goals in the Northern League the previous season as Tow Law finished 2nd. Initially Brian was signed by United for to play in the Avon League with the reserves before breaking through into the first team. Unfortunately the transfer embargo came into effect freezing him out of the first team squad for the 2001/02 season. He was loaned back to Tow law when the reserve season finished.Brian scored on his Debut in a 3-1 defeat against Hartlepool. 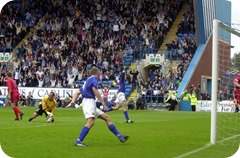 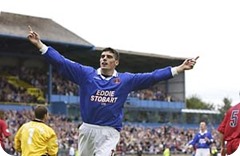 Brian scoring on his debut

Brian went on to record his 1st United hat trick in a 4-2 win at home against Boston, but his next hat trick was the most important one scoring 3 in a 3-2 win over Shrewsbury to keep united in the football league for another season at least (highlights here). I was there that night in 1 of my 2 visits to Gay Meadow (in fact you can see me in the highlights standing on the wall 02:11 when the Manager came out at the end of the game) another top away day with Carlisle (sadly I was driving so I was sober) 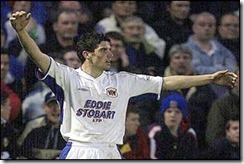 He scored nine that season but fell out of favour under New Manager Paul Simpson the following year and moved on to Gretna. Further spells in Scotland, and in English non-league, followed, before a move to Sweden with Ostersunds. Now 35, he is manager of Swedish third-tier side Ytterhogdals. 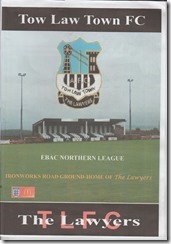