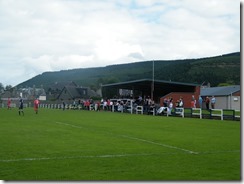 Vale of Leithen Football Club are a football club from the town of Innerleithen, Scotland. They play in the Lowland Football League, and their home games take place at the town's Victoria Park.

The club is one of the oldest in the Scottish Borders, having formed in 1891, they became full members of the Scottish Football Association in 1897. The club played at Caddon Park and initially played their first two games as Leithen Vale but subsequently changed their name to Vale of Leithen Football Club. In 1922, they moved to their current home, Victoria Park.

The team's motto is "Keep Faith", and features on their club crest, along with the town's patron saint, St. Ronan. The home strip features a blue shirt with white sleeves, blue shorts and red socks; the away strip is all-red, with white trim on the sleeves.

Vale of Leithen should not be confused with the slightly differently named junior team Vale of Leven. 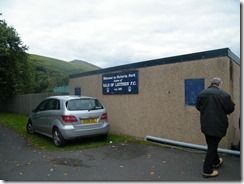 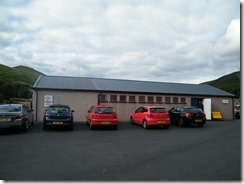 I made my way up the A7 to Hawick and took the kids swimming at the pool there we left at 2pm and made our way along the A707 and A72 from Selkirk towards Innerleithen. Vale went up against The Shire with a depleted squad and lost narrowly 0-2 to a good but inconsistent Shire side Paul Sludden and Kevin Kelbie with the goals for shire after 64 Minutes and 90. Vale had 2 players forced off with Injury as well a full report is here on the Vale website. After the game I made my way back Via the B709 and A708 towards Moffat before joining the M74 back to Carlisle We passed through St Mary’s Loch on the way back. 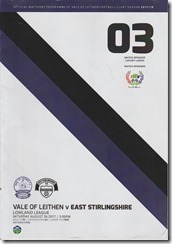