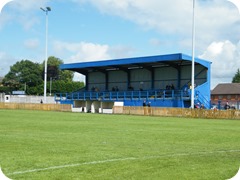 Laburnum Rovers were founded in 1956 as an under 14’s side after a few years the club decided to carry on into adult football and after a brief spell in the Leigh League they joined the Bolton Combination. Jack Crilly Succeeded Joe Riley as Chairman and did a lot of hard work to bring the ground up to a reasonable standard, but suddenly died in 1980 and as a tribute to the work he did they named the ground after him. In 1980 they Joined the Cheshire League but a stipulation of entry was that they added the town’s name in the the club title so Atherton Laburnum Rovers was born. In 1982 they became founder members of the North West Counties League they were placed in Div. 2. In 1986–87 despite finishing second-from-bottom of Division Two the club were promoted to Division One as part of league reorganisation and due to the quality of the facilities at Crilly Park. In 1989 floodlights were erected and in 1991 the changing rooms and clubhouse were rebuilt. In 1992-93 the club won the league title with 106 Points but promotion to the Unibond league as it was then was denied due to ground grading. The club won the League again the following season and this time they were promoted to the Unibond League. 1996-97 saw the club struggle financially and they were relegated finishing bottom of the league. The club continued to struggle and were relegated again to Division 2 in 1999-00. Amazingly they won promotion back to the 1st Division at the 1st attempt. They stayed in the now renamed Premier League until 2011-12 when they finished bottom. 13th 2012-13 8th 2013-14 12th 2014-15 17th 2015-16 and 20th in 2016-17 they are hoping to do better this year.

The club play home matches at Crilly Park, which has a capacity of 3,000, of which 250 is seated; three sides of the ground are covered. They originally played at Laburnum Road Playing Fields, from which they took their name, and used a shed in a nearby allotment as a changing room 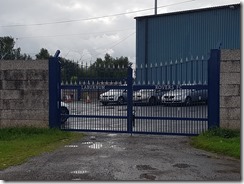 The planning had begun for this in early July when I booked train tickets to Wigan for £5 each way I knew there’d be some games on around the area and was relying on the fixture computer being kind. Sure enough when the fixtures came out Atherton LR, Daisy Hill and Ashton Athletic were at home. Unfortunately buses replaced trains between Wigan and Atherton and likewise Daisy Hill, and Ashton was a 25 Minute walk from the station. So I decided on Atherton LR I caught the 1047 from Carlisle an was in Wigan just after 1220 I had lunch and a drink in the Moon Under The Water Wetherspoon’s before boarding the 1310 bus to Atherton. The 40 Minute journey seamed to take forever as we weaved our way through Lancashire and I was the only one on the bus which meant the bus driver kindly dropped me off outside the ground as we went pass which saved me the walk back from the station. Cheadle Town won this game 2-1, The 1st goal came in the 32nd Minute when a cross from Chris Sherrington found Rick Whyatt unmarked in the middle of the pitch and he was able to slide the ball home. 5 minutes later from a corner Cheadle went 2-0 up when the impressive Aaron Fleming headed home from a corner. On 58 minutes Atherton got back into the game when Ryan Allcocks clearance landed straight at the feet of Theo Kidd who smashed home. Home fans were expecting the comeback but it didn’t happen Cheadle held on. After the game I had a short walk to Atherton Station for the 1710 bus back to Wigan and then the 1823 back to Carlisle Arriving home around 2015 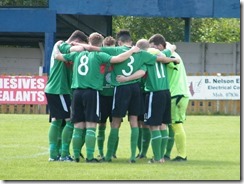 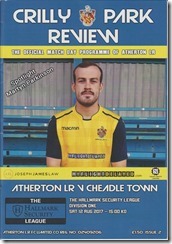