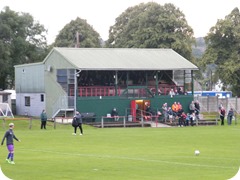 Dalbeattie Star Football Club is a Scottish association football club based in Dalbeattie. The club was founded in 1905 and joined the South of Scotland Football League.They won the league title for the first time in 1924-25 followed by championship success five years running, before the club folded prior to the Second World War. The club re-joined the league after the conflict, but lasted just one season before they folded altogether in 1948. They reformed in 1976 and were successful in winning the league in 1984-85 & 85-86, 88-89 & 89-90 they would then have to wait until 2011-12 and 2012-13 to win it again. For the 2013-14 Season they were admitted to the Lowland Football League.. They were 3rd in the 1st season then 4th 9th and 5th last season. 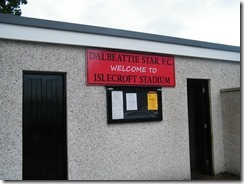 The stadium was opened in 1950 it has a capacity of 3,500 with 100 seats. Their is one main stand at Islecroft the distinctive green wooden stand that has seen better days with the changing rooms underneath and the small social club behind the stand. Entry to the social club is via a metal staircase at the side of the stand. There is also another building which houses the tea hut, turnstiles and committee room. The remainder of the ground is open and grass sloped. Floodlights were added in 2016 halfway through the 2016-17 Season. 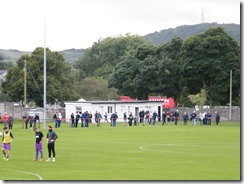 I left work just after 1730 and was in Dalbeattie just before 7 I had time for a fish supper at the local chippy, I declined on the local fried pizza delicacy. The game got off to a frantic start when a cross from the right was turned in at the far post by the Stirling forward number 11 Kevin Keane then moments later Stirling were harshly awarded a penalty and from the spot kick Stirling number 8 Paul McCafferty made the game 2-0 and we hadn’t even played 5 minutes. Then moments later Dalbeattie had the ball in the Stirling net when a cross from the left was chested down by the number 7 Lewis Todd and volleyed the ball across the keeper and into the net from the edge of the area a fine goal and it seamed like the come back was on but sadly it wasn’t despite their best efforts Dalbeattie were unable to breach to solid Stirling defence. The Stirling goalkeeper was in fine form. After the game the drive home was pretty simple and took me just over an hour back to Carlisle 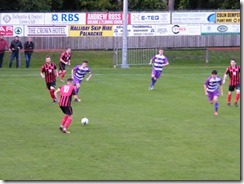 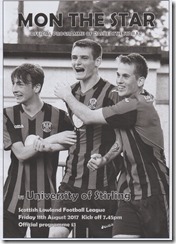