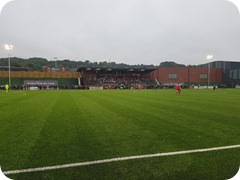 Scarborough Football Club was formed in 1879 by members of the town's cricket team, and played their earliest games at the cricket ground in North Marine Road. The football club soon moved to the nearby Recreation Ground. In 1898, Scarborough Football Club made the move across town to the Athletic Ground on Seamer Road. Scarborough spent most of their early days competing in the Northern League. It was in 1927 the Yorkshire club became professional and joined the Midland League. After only three years they became champions of it. Because of their decent performance in the Midlands League, the club were entitled to become one of the founding clubs in the new Northern Premier League in 1968. The 1970s would prove to be a successful time for the club; Scarborough FC won the FA Trophy three times at Wembley Stadium, beating Wigan Athletic, Stafford Rangers and Dagenham in the process. By the end of the 1970s, Scarborough had been selected to be part of the new Alliance Premier League, known today as the Football Conference. They stayed in this league for several seasons with generally consistent finishing positions in mid-table. In 1986 the club gained a new manager named Neil Warnock, and his team became champions of the Conference in 1987. They were automatically promoted into the Football League, the first club to achieve this feat by this route.

The last day of the 1998-99 (8th May 1999) saw Scarborough's last game as a Football League Club. The day involved my Club Carlisle United,This day is now known in Carlisle as St Jimmy Glass Day. Going into the game Carlisle were bottom with 46 points and Scarborough just above with 47 Carlisle’s Goal difference was –11 and Scarborough’s –27. Carlisle knew they had to win to stand any chance of survival. Scarborough went behind at home against Peterborough when Richard Scott Scored for the Visitors in the 7th Minute. Just before half time Darren Roberts Equalized for Scarborough in front of 4,789, and that was how it remained at F/T. Meanwhile at Brunton Park in front of 7,599 fans. Just after half time in the 49th Minute Lee Phillips scored for Plymouth to leave Carlisle hovering on the brink of relegation. Shortly after in the 62nd Minute David Brightwell Scored an equalizer and that's how the game remained until the 90th Minute. When the Full time whistle went at The McCain Stadium both games were tied at 1-1 and Scarborough thought they had done enough with fans celebrating on the pitch, but sadly they hadn’t with the 4th official indicating 4 Minutes of Injury time. In the 94th Minute Carlisle received a corner and Carlisle Manager sent goalkeeper Jimmy Glass up for the corner. All 22 Players on the pitch were in the area and as the corner came in Scott Dobie’s header was pushed out by the Plymouth goalkeeper and there was Jimmy Glass to smash home the rebound and preserve Carlisle’s League status for another season. Sadly it was only a temporary reprieve for Carlisle who eventually fell into the Conference in 2004. Also sadly for Scarborough it was the beginning of the end for them

In 1999-2000 they were 4th and in 2001-02 they were 12th despite being bottom at Christmas, Russell Slade the man who helped complete the turn around. 2002-03 they finished 7th and 2003-04 they were 15th but gained much needed revenue with an FA Cup 4th round tie against Chelsea John Terry’s goal gave the Premier league side safe passage to the 5th Round with a 1-0 win, Slade then left shortly afterward to take charge of Grimsby Town. 2004-05 they Finished 13th but were unbeaten at Home. and in 2005-06 they finish bottom but Scarborough were not initially relegated, as Canvey Island resigned from the league and Altrincham were deducted 18 points for fielding an ineligible player, meaning that they occupied bottom position instead. However the Conference were not convinced of the club's financial stability, and Scarborough ended up suffering the same fate as Northwich Victoria had the previous year by being relegated to the Conference North. The club started their first season in the Conference North with minus 10 points as the club had been in administration. What proved to be their last game, on 28 April 2007, was a 1–0 win at Hucknall Town. However, Scarborough finished 20th meaning that had they survived until the start of the 2007–08 season, they would have been relegated to the Northern Premier League. The club had been hoping to move to a new stadium on the outskirts of town by the start of the 2009–10 season, with the proceeds from the sale of the McCain Stadium to a housing developer wiping out the club's historic debts in addition to providing the finance to build the new ground. However, a covenant existed on the McCain Stadium that restricted its use only to sporting activities. Scarborough failed to convince Scarborough Borough Council that the proposals would raise enough money to both pay off the club's debts and build a new ground. On Friday 8 June 2007, the FA in London said that it was a very strong possibility that by 12 June Scarborough F.C. may well go out of business. On Tuesday 12 June, the club was given an eight-day 'stay of execution' following a 'change of heart' by their local Borough Council. But on 20 June it was wound up in the High Court, ending its 128-year run as a club with debts of £2.5 million. However, the winding up of Scarborough F.C paved the way for the supporter's trust to form a club as Scarborough Athletic 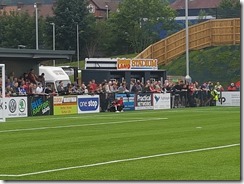 The club completed a permanent move to a new ground in Scarborough in the summer of 2017, following ten seasons sharing with Bridlington Town. The 1st game at the new ground was a Pre Season friendly against a Sheffield United U23 Side on the 15th July 2017 the Seadogs as they are nicknamed lost 4-1 in front of a sell out crowd (Officially 2,038). The Official Capacity is 2,070 with 250 of those seated. The ground is situated not far from the old ground last named the McCain Stadium after a sponsorship deal with chip makers McCain in 1988. The ground itself has a modern 4g pitch and a leisure centre built onto the side of it with one main stand and a smaller terracing behind one of the goals.

The McCain Stadium was built in 1989 and the club remained there until there demise in 2007. Club attendance records were broken when the club reached the 3rd Round of the FA Cup, during the 1937–38 season. The game against Luton Town, which was a 1–1 draw, saw 11,162 people packed into the Athletic Ground. Unfortunately for Scarborough they were soundly defeated 5–1 in the replay.

On 26 September 2007, Scarborough Borough Council announced its intention to purchase the ground from the liquidators. The liquidators, Begbies Traynor, applied to have the covenant lifted. This was contested by the Council. As a result, the stadium remained empty and derelict, and was subject to vandalism. In December 2008 the Council finally purchased the ground from the liquidators. On 15 December 2009, the Council announced that it had decided to invest money in a new facility rather than regenerate the stadium. On 13 March 2010 Scarborough Council stated it was about to discuss demolition work at the stadium. Further discussions took place in April 2011 and on 13 April 2011 the Council voted to demolish the stadium. It was also revealed that Featherstone Rovers RLFC had agreed to purchase the East and West stands and undertake the demolition works that the council required for nil cost. The Demolition of the stadium began in September 2011 and was completed in November 2011. The gates at the entrance to the ground are to be preserved and incorporated into a new sports village complex to serve as a lasting reminder of the former Athletic Ground/McCain Stadium. I never seen a competitive game at the old ground but was able to Visit in August 2010 and sneak in through a hole in the fence.  On 13 August 2015 Scarborough Borough Council granted planning permission for a Lidl supermarket to be built on the by now flattened site. It opened its doors on 16 February 2017. 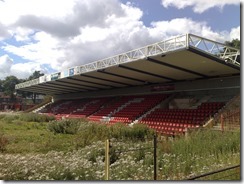 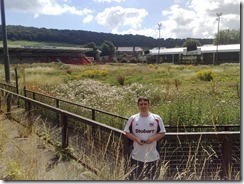 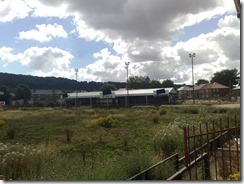 I made my way down from Whitby were I was staying having been enjoying a 3 day break The Journey only took around 25 Minutes. The road the ground sits on is not yet on a Sat Nav so be careful if your following directions although it is well signposted. I parked in the Leisure centre car park for free. Entering the turnstiles for the price of £5. The game was the Dave Holland Memorial trophy between Scarborough and Bridlington to celebrate the life of the former Chairman of Scarborough who had worked so tirelessly to get football back to Scarborough but sadly died before his dream could be a reality, this will now be an annual event. Scarborough Won this game 3-2 despite being comfortably 2-0 up Bridlington fought back to bring the game to 2-2 and just as the game was approaching extra time Scarborough scored to win the match. 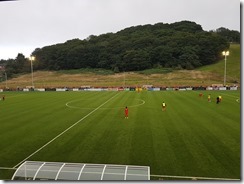 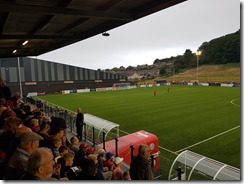 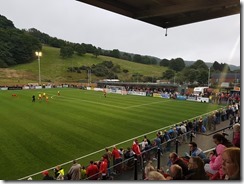 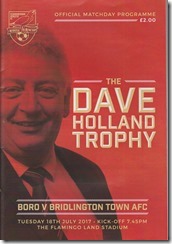