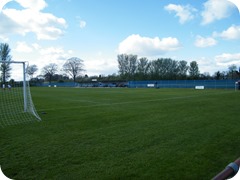 Founded in 1908 under the name Edinburgh Civil Service Football Club, their first ground was the Stenhouse Stadium, which later became a venue for greyhound racing, before moving to Pinkhill Stadium in the 1920s. They moved to the Edinburgh Area Civil Service Sports Association in Muirhouse in 1957, where they continue to play their home games today, Also known as Christie Gillies Park Located just off Marine Drive Edinburgh. In 2016 They were Elected to the Scottish Lowland League along with Hawick Royal Albert. 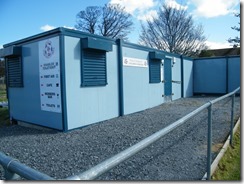 It was a sunny day leaving Carlisle around 10am heading up the M74 and A702 towards the Capital of Scotland. We arrived at Easter road around 12 where our lift for the day was going to see Hibernian clinch the title at home to Queen of the South. We parked up close to Easter road and had a little look in the programme shop just outside the ground. We then had a walk towards Edinburgh Centre to catch the bus from just outside the Theatre bus number 16 which took us right up to the ground.

You come into a little car park, but there is building work going on (I can only assume it’s some sort of sports pitches for the Edinburgh College there not quite finished yet).We had to pay at the little gate there were no programmes or team sheets, we then had to walk round the building site to the main gate and into the ground   Mainly an open ground it has one small stand along the North side with the Dug out's on the South side. The club house is set back from the East side and the changing rooms must be behind 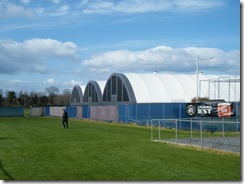 The game itself got off to a flying start and you feared the worst for Civil Service Strollers when after 4 minutes a high ball into the box was scrambled home by officially A.Gillen but in truth am not sure who got the final touch. Shortly afterwards Stirling University doubled their lead when a cross from the left was headed home by L.Bonar . In the second half Civil Service Strollers mounted a fightback with the wind behind them. In the 70th Minute a good run down the right by Matty Cunningham who then crossed the ball for Jordan Finnie to head home and make it 1-2. CSS pushed for an equalizer but were unable to find the net and Stirling University went away with the 3 points, 3 Points that meant a place in next seasons Scottish FA Cup secured. After the game we walked to a nearby Toby Carvery to await collection by my friend who took us back to Carlisle. The lack of Programme’s or Team Sheet’s meant I have no idea who was playing for either side. 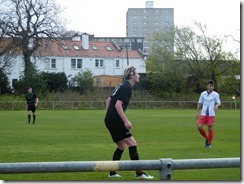 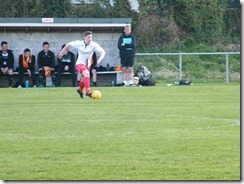