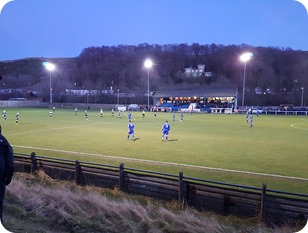 The club joined the East of Scotland Football League, a senior non-league competition for the 1953–54 season. In 1966, the club applied to join Scotland's main national league competition – the Scottish Football League – when it was seeking to increase its membership by one. Hawick Royal Albert applied for election along with Gala Fairydean, but both lost out to Clydebank. Remaining in the East of Scotland League, they won the competition for the first time in the 1966–67 season, and defended the title the following year. The Club reached the first round proper of the Scottish FA Cup for the 1st time, losing 3–0 away to St Johnstone in January 1968. In 1973-74 The Club won the East of Scotland Football League for the last time. Hawick Royal Albert applied to join the Scottish Football League for a second time in 1975, when the league was restructured, along with seven other non-league clubs, but was eliminated in the first round of voting. Ferranti Thistle, which later became Livingston, was the club elected. In 2016 the club applied to join the Lowland Football League and were duly accepted for the start of the 2016-17 Season along with Civil Service Strollers.

Hawick Royal Albert first played its home matches at Wilton Lodge Park near the village of Wilton Dean in Hawick. In 1963, the club moved to Albert Park in the town. The ground is located on Mansfield Road on the northern bank of the River Teviot and is adjacent to Mansfield Park, a rugby union ground.Shortly after moving to the ground, it was inspected and passed criteria to allow the club to become a member of the Scottish Football Association. The opening game at the ground was a friendly between Hawick Royal Albert and Hibernian. The spectator stand at Albert Park was constructed from the steel remnants of the Wilson and Glenny woollen factory, which was destroyed by a fire in 1959. Floodlights were installed at the ground in 1981, and were first used in a friendly against Celtic. Included in Celtic's squad was future Scotland internationalist, Charlie Nicholas and future Premier League manager, David Moyes. The Capacity of the ground is around 1,500 with 500 Seated in the stand. 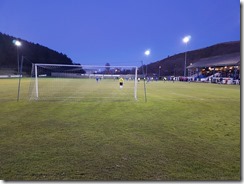 My Day Started out at 12.30 Selling Programmes outside Brunton Park home of Carlisle United as per usual on a home match day. after the game finished (a disappointing 2-0 Defeat at the hands of Crewe Alexandra ). I made my way up the A7 in search of a decent game of football. The Journey took around 55 Minutes and I arrived in time to have my tea in the Local Wetherspoons The Bourtree. I then made my way up to the ground for 6.45 with the 7pm KO looming. Earlier in the week I’d been contacted by the club asking for a few words to describe myself and why I was a ground hopper, I replied with a few words and they kindly printed them in the programme. They also Kindly left me a badge at the gate for me to collect, a total surprise and a very kind gesture. The game itself was a 7pm Ko to combine with 4 other games over the weekend as part of groundhopuk Scottish Groundhop weekend.

Hawick Started the game the stronger and took the lead on 13 minutes when Hamish Hunter was lurking in the box to finish after a fine save from the Shire Keeper. The visitors equalized in the 33rd Minute when a cross from the right found the head of Andy Rodgers who was able to steer the ball into the net. Hawick again started the stronger in the second half and were rewarded when they once again went ahead when Kris Mitchell was able to fire home. With 15 Minutes remaining Hawick 2nd Bottom were comfortably 2-1 ahead against the 2nd Placed team, although you could sense more goals were coming and Shire were going up through the gears. The current score line meant East Kilbride would be Champions and Preston Athletic would finish bottom, The would all change on 76 minutes when after 3 great saves from the Hawick keeper Shire finally managed to find the back of the net, Substitute Jamie Glasgow heading a cross home. 4 minutes later and the game had turned on it’s head when Andy Rodgers was able to smash a shot home from 12 yards after some confusion in the Hawick Box. The Hawick keeper was shown a yellow card in the aftermath of the goal but continued to voice his opinions on the goal and was subsequently shown another yellow card and sent off kicking everything in sight as he left the field. Hawick were then able to continue with 10 men. Paul Sludden then added a 4th goal to give Shire the points in their chase for the top spot. It was harsh on Hawick who deserved something from the game. East Stirlingshire are 8 points behind East Kilbride with 3 games remaining but crucially they play each other on the last day of the season, a game that promises to be a cracking one should shire be able to win the next 2 games and Kilbride lose the next 2. At the bottom end Preston Athletic are 8 points adrift with 3 games remaining, although Hawick have a game in hand. It is then almost certain that East Kilbride are going to win the league and Preston Athletic are going to be relegated baring a miracle of Jimmy Glass type proportions.

After the game I made the Journey back down the A7 arriving home around 10pm an enjoyable end to the day after a disappointing start at Brunton Park. Once again the Scottish clubs proving how friendly they are compared to the English clubs. 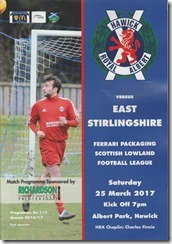 Matchday Photo Album (Some older photo’s in there to)