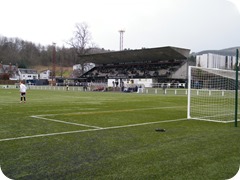 Gala Fairydean first played its home matches at Eastlands Park in Galashiels between 1909 and 1913, before moving to Mossilee for a spell until the 1920s. The club moved back to Eastlands, and stayed until 1929, when Netherdale was opened. Netherdale has been the club's home since 1929 and is located in the south-east of Galashiels. The ground's main spectator stand was designed by architect Peter Womersley, alongside engineers Ove Arup and built between 1963 and 1965. The stand has a capacity for 750 spectators and the ground as a whole up to 4,000. The cantilevered concrete structure is protected as a Category A listed building. The club bought 300 seats from Newcastle United's St James' Park stadium when it was refurbished, but were replaced in 2006 by wooden benches. The Official Capacity is 4000
The Stadium has undergone significate improvements with a 3g Pitch being installed in 2012 which gives the club much needed revenue 365 days a year and during the poor weather, also giving the ground a more tidy feel about the place. 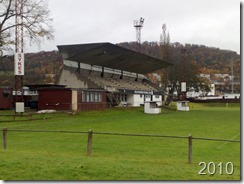 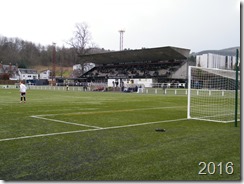 The club's most famous player is the former Hibernian, Celtic, AS Monaco, Everton and Scotland international, John Collins, who under his father Norrie's eye, trained and joined the club, before moving onto Hibernian as a young player. Collins, now a regular television pundit, played a few games for Gala Rovers when they were an amateur side as a teenager but never played for a competitive match for the town’s senior club at the time, Gala Fairydean, as he was quickly signed up by Hibs. He did, however, make the occasional guest appearance in friendlies and testimonials. He also re-signed for the club in 2014 as an 46 Year old but am sure if he ever played a game.

For the 2013-14 season Gala Finished 10th out of 12 teams losing 3-0 at home in the Scottish FA Cup 2nd round to Clyde after beating Glasgow University 3-1 in the 1st Round also at home. The following season they Finished 8th out of 14 teams and were knocked out of the Scottish FA Cup away at Gretna 2008 in the 1st Round. In 2015-16 they finished 11th out of 15 teams Losing to Linlithgow_Rose in the Scottish FA Cup 1st Round.
Going into this game they currently lie 12th in the table. This was my second game of the day after leaving Selkirk after the game against Vale of Leithen finished 6-0, I made the 6 mile Journey further up the A7 took around 10-12 Minutes, Arriving just in time for KO. Gala won this game 5-1 with goals from Ross Aitchison 43,50,61 Miller 64 Noble 68 and Meikle for the Visitors. Billy Miller’s Free kick being the highlight. The game kind of flattered Gala who were up against it in the 1st half but Hawick were unable to find a goal. Gala stepped up a gear in the second half and were rewarded with the win courtesy of some clinical finishing. At half time I wandered into the fabulous bar underneath the main stand which has some fascinating memorabilia on the walls, if it wasn’t so busy I'd have taken some photo’s. Gala moved up a place to 11th in the table after this win. 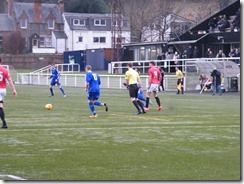 After the game I made the Journey back down the A7 in the rain and dark arriving home around 1815 again the road was so quite I don’t think I seen another car from Hawick until Longtown. It’s not often I get chance to do 2 games in a day so hats off to Selkirk and Gala, with 12 goals thrown in for a combined entrance of £10 thoroughly worth the money. Programmes were £1.50 and £2 so that came to £3.50 and with less than £20 fuel I can’t complain I could have got the train but it’s a 15/20 Minutes walk from Either Galashiels or Tweedbank although I’d have had to get a train to Edinburgh then change onto the borders railway newly opened in 2015. The chance to ride on the Borders railway will have to wait. 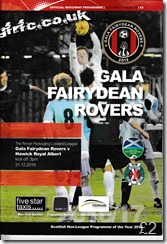 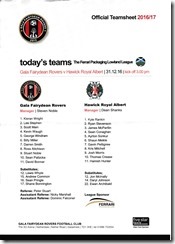