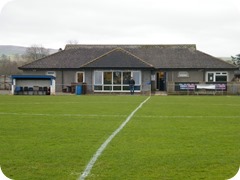 Selkirk Football Club (nicknamed the Souters) are a Scottish football club based in the town of Selkirk. Founded in 1880, they are the oldest established football club in the Scottish Borders. The club was selected as a founder member of the Lowland Football League, which was formed in 2013 by the Scottish Football Association (SFA) as part of a proposed pyramid system.Their home ground is Yarrow Park. The Club Played at Ettrick Park from 1906-2000 and moved into Yarrow Park in Feb 2000 2012 saw a new terrace installed on the south side and in 2013 a 100 seated stand was constructed on the north side. The ground is adjacent to the Cricket Club and Rugby Club The official Capacity is 1,162

The 1970’s were the clubs most successful times The five years of glory commenced with the release of Ian Whitehead from Berwick Rangers in 1973, Chalky as he was universally known was snapped up by Selkirk and became player/manager later in the season. Whitehead became the architect of the most fruitful period of success in the club's history and soon bagged the first trophy in 28 years for Selkirk FC. December 1977 started on a remarkable note for Selkirk. As the support slowly filtered in to Ettrick Park for a league match against lowly Eyemouth United, the sharp shrill of the referee's whistle sounded the start of the game. Ian 'Chalky' Whitehead meanwhile had spotted the goalkeeper off his line in conversation with his centre-half. Brian 'the bear' McConnell kicked off for Selkirk and Chalky hammered the ball into the top corner of the net. Referee George Smith timed the goal at five-seconds, a second quicker than the then current record published by the Guinness Book of Records.Like all good things however, Selkirk's Golden Era came to an end when Ian Whitehead was enticed back into Scottish League Football as a coach with Second Division Berwick Rangers

The club have appeared in the Scottish Cup on numerous occasions, with their most infamous appearance having been in 1984–85, when they were beaten 20–0 by Stirling Albion. This was the biggest winning margin in British senior football during the 20th century. The first team had temporarily dropped out of the East of Scotland Football League, and were effectively defunct at the time to preserve the club's future participation in the Scottish Cup, 'the Vics' took to the field and were mercilessly exposed by their professional opponents

Famous players produced by the club include two Scottish internationals – Selkirk-born Bobby Johnstone, who was a member of Hibernian's Famous Five, and Bob Mercer, who played for Heart of Midlothian

Selkirk started season 2013–2014 as a founding member of the Lowland Football League, leaving the East of Scotland League after an association stretching back to 1923. On 19 August 2013, Selkirk became the first Borders football club to be audited and meet the criteria to hold an SFA Licence. Selkirk Finished bottom with 5 points out of 12 Teams with 1 win and 2 Draw Selkirk’s only win coming away at Whitehall Welfare 1-0.

The club started season 2014–2015, in the SLFL The biggest sensation however was the signing of ex-Hibernian, Birmingham City, Lokomotiv Moscow and Scotland national football team star, Garry O'Connor. Selkirk Finished 12th Again but this time out of 14 Teams With 6 Wins and 5 Draws With the highlight being a 7-0 win over local rivals Gala Fairydean

Selkirk made national headlines again at the start of the 2015–2016 season, this time with the signing of Scottish football's first ever poet in residence, Thomas Clark  Steve Forrest was sacked as Selkirk manager on 28 October 2015, Garry O'Connor took charge. Selkirk finished 12th again out of 15 teams with 9 win’s and 2 draws

Going into this game Selkirk were bottom with only 3 wins and a draw, those wins coming 7-4 against East Stirlingshire, 7-1 against local rivals Gala Fairydean and a 4-0 against BSC Glasgow Garry O'Connor has been replaced as manager by Ian Fergus in Dec 2016. Ian came to Selkirk with a wealth of coaching experience having coached Hibs U-17's and at Hearts, Hamilton Accies and Dunfermline Youth Academies. 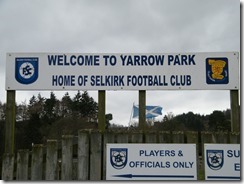 I wasn’t intending on making the journey to Selkirk this New Years Eve I was originally intending on going to Gretna V Dalbeattie but after being advised by Neil Edgar that the game was a 1pm KO not 2pm It meant I had the opportunity to go to 2 games with Gala Fairydean Kicking off at 3pm I made my way up the A7 leaving Carlisle at 1135 arriving at Yarrow park for around 1245. I had a good drive up the A7 and the road was fairly quite for a change . I was a bit concerned at 1st as when I was arrived there wasn’t a sole inside the ground and no players warming up on the pitch, but the man on the turnstile assured me the game was a 1 o clock KO and the game was on. As I walked around the pitch the Selkirk Players came out to warm up. Almost as soon as they left they then came back out with the Vale of Leithen players, ready to start the game Selkirk FC won this game with a resounding 6 -0 win. 3 goals from Kerr Scott, 1 goal from Phil Addison, 1 goal from Garry Nicholson and an own goal from Vale (McBride)Saw them win the last game of 2016 a rather comfortable win I must say which enabled them to move of the bottom of the table. During the game I was able to meet up with fellow hopper Neil Edgar another groundhopper I’d never met but the craic was good and the game didn’t disappoint. Defiantly was the correct choice to come to the Scottish Borders rather than Gretna. As soon as the game finished I was off to Gala Fairydean for the 2nd Match 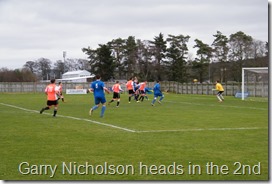 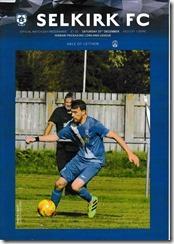