Heaton Stannington Football Club are a semi-professional association football club based in High Heaton, Newcastle upon Tyne, in England. They play in the Northern Football League Division Two. Although officially founded in 1910, Heaton Stannington were in existence by 1903 and playing at Miller’s Lane on the site of the current Fossway The club name originates from its links with the Stannington Avenue area of Heaton. The club spent the next 19 years in NAL Division One and gained their first trophies in 1934 and 1936 when they won the Tynemouth Infirmary Minor Cup and NAL Challenge Cup respectively. The first glory season came in 1936-37 when the club won NAL Division One, and were Northumberland Amateur Cup winners and NAL Challenge Cup runners up. The reserves were also NAL Division Two runners up. For one season, 1938-39, the Stan participated in the Tyneside League and were runners up. By the 1930s the team were playing at the Coast Road ground. The club were elected to the Northern League in 1939. They only managed one season in the league before it was suspended for the duration of the Second World War. The league restarted in 1945 but Heaton Stannington were elected, until 1946, as a non-playing member as their ground was being used by the military. After 5 consecutive bottom three finishes, the club resigned at the end of the 1951-52 season and joined the Northern Alliance until 1956. The next 16 seasons included involvement in the NAL (1956-59), North Eastern League (1959-60) and the Northern Combination (1960-72). In 1972 the club stepped up to the Wearside League and remained there for ten years. They were forced to resign from the league in 1982 for financial reasons due to the club trustees, who had formed a limited company in 1968, putting the annual rent up from £400 to £1500. The company then tried to build a supermarket on the ground but the planning application was defeated. In 1983 the High Court ruled that the ground belonged to the football club and the company had to relinquish ownership. The team played in the Tyneside Amateur League (TAL) during 1982-83 as Heaton United. Back as Heaton Stannington, they won the TAL in 1983-84 which was only their second league title up to this point. The next 2 seasons were spent back in the NAL where they were champions in 1985-86 as well as wining the Northumberland Minor Cup. For the next 27 years the club were in the Northern Alliance, which became a 3 tier league in 1988 and saw the Stan placed in the Premier Division. After two relegations to Division One, the Stan achieved stability by spending 9 seasons in the Premier Division. The club won their highest level league trophy when they became Champions in 2012 but were denied promotion due to ground grading In 2012-13, they achieved the treble by not only retaining the title but by also winning the Northern Alliance League Cup and the Northumberland Senior Benevolent Bowl. but were promoted to the Northern League Div 1 on the proviso they installed floodlights by the end of September

In October 1935, they started playing at Newton Park in High Heaton on the site of a recently filled-in quarry. In 2007,the ground was renamed Grounsell Park in honour of the service given, both on and off the pitch, by Bob Grounsell. Grounsell Park now boasts new floodlights and a stand to complement the other facilities including a bar serving real ale. Much of the recent success is a result of the commitment and work of manager Derek Thompson

In July 2012, Heaton Stannington played a match against the Gabon national under-23 football team as part of their preparations for the Olympics. Gabon won the game 4–0 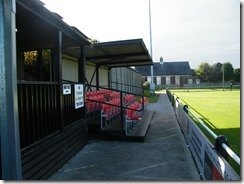 We caught the 1110 Virgin Trains East Coast train which had been diverted via Carlisle to Newcastle arriving in Newcastle just after 1230 after a quick bite to eat we caught the number 38 bus from close to Central Station straight up to the ground. I claimed by Euro millions ticket winnings from a local shop nearby sadly only £4.70 but it helped pay for my entry to the ground which was £5 and £1 for a programme.

Billed as Newcastle's friendliest, fastest growing and best supported non league club they certainly lived up to that billing as they made me quite welcome from the moment I arrived. I was introduced to the Secretary and various other committee members and invited up into the members room for half time refreshments. Heaton Won this game rather comfortably 3-0 Goals by Imray, Johnson and Walton guided The Stan to what was strangely their first victory at home this season. Heaton were comfortable all day long and never looked like losing. At half time I had some refreshments in the club house of which the fruit scones were delicious. After the game we boarded number 38 bus back to Newcastle and then the 1810 back to Carlisle again another Virgin East Coast Train arriving home around 1935

The ground itself is an open one with changing rooms in the corner and the clubhouse and stand in the middle. One strange thing I noticed was the number of people who had built there vegetable patches inside the ground behind the houses 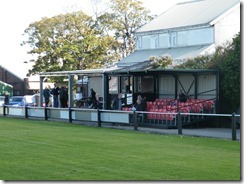 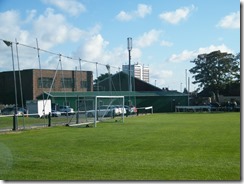 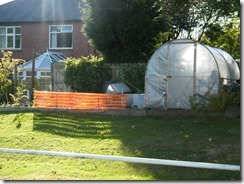 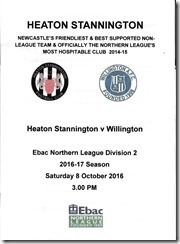 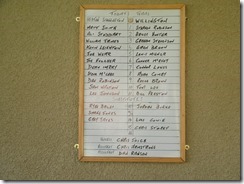