West Didsbury & Chorlton A.F.C. is an English football club located in Chorlton-cum-Hardy, Manchester. The club plays in the North West Counties Football League Premier Division. West spent most of its history in the Lancashire and Cheshire League, then joined the Manchester League Division One in 2006. After gaining promotion to the Manchester league Premier Division and entering the FA Vase in 2011, the club was accepted into the North West Counties Football League Division One for the 2012–13 season, and gained promotion to the Premier Division after just one season. The club originally played at Christie Playing Fields, but this ground was sold off. The club moved to Brookburn Road in Chorlton for the 1997–98 season and later changed their name to reflect this

Parking up next to the Sale Waterpark Tram Stop Just off Junction 6 of the M60 I walked down towards the Jackson Boat Pub Over the Bridge over the River Mersey and through the park towards the ground. It only takes a few minutes and the path brings you right out at the ground

West kicked off their 2016/17 pre-season losing in a thrilling 6-3 shootout to Evo-Stik League Division One North side Bamber Bridge. a copy of the match report is here 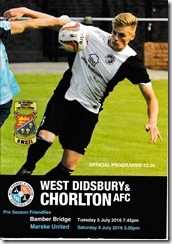