Carlisle City Football Club is an English association football club based in Carlisle, Cumbria. It is a member of Division One of the North West Counties League. They play at Gillford Park after taking over the lease in 2015.

The club was formed in 1975 by two former Carlisle United players, George Walker and Ron Thompson "to give local lads somewhere to play". It has been a member of the Northern Football Alliance since then.Carlisle City competed in the FA Cup between 1976–77 and 1980–81. Their best performance was in 1979–80, when they took Bishop Auckland to two replays in the first qualifying round. They also played in the FA Vase during the same period, and reached the third round in 1976–77.

After taking over the lease of Gillford Park from Celtic Nation in 2015, the club revealed ambitions to play at a higher level. They applied to join North West Counties Football League for 2016–17, and in April 2016, it was confirmed that Gillford Park had passed an FA ground grading test. On 13 May 2016, it was confirmed that City had been promoted to the North West Counties League Division One and City also confirmed that former Penrith Manager, James Tose to be City's new Manager. He will be assisted by Jonny Allan who has played for Northwich Victoria and Carlisle United and was Assistant Manager at Celtic Nation before the club folded in 2015

Gillford Park Stadium was upgraded in the early 90’s to enable Carlisle Border Raiders to use it after they left Brunton Park. My 1st Memory of it was when in the early 90’s we were given some free tickets at school to try and encourage more youngsters to watch rugby unfortunately I didn’t enjoy it and to this day it still remains the only Rugby match I have ever watched not that I can remember any of the match or who they played. Eventually Border Raiders merged with Barrow and Professional Rugby left Carlisle. A record of 2,042 what the highest recorded Rugby Match and highest attendance at the Stadium.

The club was established in 2004 and was originally known as Gillford Park Spartans and joined Division Two of the Northern Alliance in 2005. They finished second in the first season in the division, and were promoted to Division One.In 2006 the club changed its name to Gillford Park, winning Division One of the Northern Alliance at the first attempt, earning promotion to the Premier Division. After finishing third in the Premier Division in 2007–08, the club finished second the following season, and were promoted to Division Two of the Northern League.

In 2012 the club adopted the name Celtic Nation, and also attracted sponsorship from Frank Lynch, a Scottish millionaire based in America In 2012-13 They Finished 10th Former Newcastle United assistant manager Mick Wadsworth was appointed manager in late April 2013, with Wadsworth revealing that he had turned down an assistant manager role at a League One side to take up the challenge at Celtic Nation.Wadsworth resigned after 10 matches in charge, and was succeeded as manager by Willie McStay. In 2013-14 It was the most successful in the clubs short history finishing 2nd in the league to Spennymoor town who took Promotion to the Evok Stik League thus denying Nation Promotion financial support for the club was then withdrawn, Wille McStay and the majority of the playing staff left the club. At one point in the summer of 2014 the club had only four registered players.Former Newcastle United, Barrow and Carlisle United midfielder Mark Boyd took on the role of player/manager of Celtic Nation appointing Nation forward, Jonny Allan, as assistant. In the 2014-15 they finished 21st and were relegated. A highest Attendance of 1019 for a game against Spennymoor in 2013-14, Although I was there and there was never 1000 people there

On 25 April 2015, Nation confirmed that they had resigned from the Northern League and would fold due to financial problems and losing the lease of Gillford Park to Northern Football Alliance Premier Division neighbours Carlisle City.Three days later Celtic Nation played their last ever match against North Shields, which ended in a 1–0 defeat.

I made the 0.5 Mile Journey over to Gillford Park for Carlisle City’s 1st Ever game in the North West Counties league having watched City’s 3 pre season Games losing all 3 Against Workington (1-3) Atherton Collieries (1-5) and Penrith (0-6) I’ve seen Gillford Park twice and Celtic Nation eleven times so this would be by 18th trip to Gillford Park if you include the Rugby game. 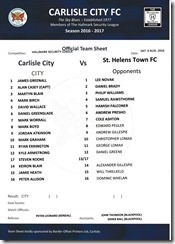 Carlisle City started off the fastest and went 1-0 up in the 9th Minute when a cross from the right found Jordan Atkinson unmarked who lashed the ball home. Ryan Errington had a good run down the left in the 10th Minute but his shot was well saved by the Saints Keeper. In the 13th Minute Mark Boyd Volleyed into the net from 30 Yards out. That seamed to spark Saints into life and on 25 Minutes they pulled a goal back when Edward Pegler volleyed in from 25 Yards out. 7 Minutes later Saints Equalized when from a Christopher Lomax Corner George Lomax Headed in to pull the scores back level Ryan Errington then had 2 good shots well saved by the Saints keeper. H/T 2-2 In the second half James Greenall in the Carlisle City had to be at his best to keep out the saints but Carlisle City then went ahead when a superb cross from Ryan Errington was turned into his own net by Daniel Brady with the Lurking Mark Worrall just behind him Brady had little choice but to put it into his own net. A Mark Boyd free kick was deflected out for a corner and from the Corner David Wallace flicked the ball on to Mark Birch who has unable to get his shot on target. In the 80th Minute Saints had free kick which was taken by Andrew Gillespie the ball then ended up in the net after James Greenall failed to hold onto it, a keeper error maybe but it was hard to tell as my view was obstructed by the wall. Saints then hit the post from a header by Gillespie but 39 Year old Mark Birch stole the show when he smashed the ball in the net from the edge of the area after a great cross from Ryan Errington and an excellent knock down from Jordan Atkinson. Carlisle City then Managed to hold on for the Remaining 5 Minutes to win.

An excellent game of football to start the season I’ll be back but it will prove to be a difficult season with lots of long distance travelling they’ll need the support of the locals,Myself included if they are to survive.

Man of the Match Ryan Errington 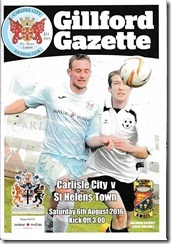