Northwich Victoria Football Club is an English football club based in Northwich, Cheshire,playing their home games at Wincham Park, Northwich, the home of Witton Albion. The club currently participate in the Northern Premier League Division One North, the eighth tier of the English football league system. The original club was founded in 1874, being named in honour of the then-reigning monarch, Queen Victoria,before becoming defunct and amalgamating with Hartford and Davenham United in February 1890 with the new club taking the old Northwich Victoria name. The new club was a founder member of several leagues including the Football League Second Division, in which they competed for only two seasons from 1892 to 1894.

The club reached the final of the FA Trophy in the 1982–83 season, but were beaten 2–1 by Telford United. However the club achieved silverware in the 1983–84 season when they defeated Bangor City 2–1 in the same competition, the FA Trophy in a replay of the final at the appropriately named Victoria Ground in Stoke-on-Trent. The first game, played at Wembley Stadium, was drawn 1–1.In the 1995–96 season, they reached the final of the FA Trophy once again, returning to Wembley for the first time since their draw and eventual victory in the competition a decade earlier. They were defeated 3–1 by Macclesfield Town.

In the 2003–04 season, Northwich were slated for relegation to the Conference North division as part of the National League System restructuring; however, the bankruptcy of Telford United, Watnall Road, the ground of Hucknall Town's not being good enough and the demotion of Margate all led to Northwich Victoria being allowed to remain at the Conference National level (A season that Carlisle United Played in the Conference).In September of the 2004–05 season, the team went into administration, and thus were deducted 10 points under National League rules, which left them in relegation trouble. However, the team recovered and finished in 19th place, nine points clear of the relegation zone. Unfortunately, they were voluntarily demoted from the Conference National anyway due to legal problems (after going into administration FA deadlines over the transfer of their Conference membership to the club's new owners were not met; the alternative would have been outright expulsion from the Conference, which would have forced them into starting again in one of the lower regional divisions).The 2005–06 season appeared to be a turn in the right direction for Northwich as they reached the Third Round of the FA Cup, and in the penultimate game of the season, beat their nearest rivals, Stafford Rangers, in front of more than 3,000 supporters to guarantee an immediate return to the Conference National and see them as champions of the Conference North.In October 2007 it was reported that the club was up for sale, and the club's existence was again threatened due to an unpaid tax bill.The club had applied to go into administration to stave off closure. In December 2007, a consortium led by Jim Rushe completed a takeover, with Rushe becoming the Club's chairman.However, Victoria Stadium remained owned by former chairman Mike Connett's real estate company Beaconet Ltd., which was in receivership. In January 2009, Connett removed safety equipment from the stadium, causing the club to move temporarily to Altrincham's Moss Lane ground.On 19 May 2009 the club went into administration for the second time in five years following their relegation from the Conference National; they owed around £500,000 in unpaid bills to creditors.They were threatened with a double relegation to the Northern Premier League as a result of this, but ultimately won an appeal to be placed into the Conference North for the 2009–10 season.The 2009–10 season saw Northwich achieve a mid-table finish, but due to the ongoing financial problems, the club were expelled from the league and placed in the Northern Premier League Premier Division. In April 2012 the Northern Premier League announced that Northwich Victoria had been expelled from the league for a breach of league rules regarding financial matters. Although lying second in the league, the club was not allowed to contest the playoffs.On appeal, FA ruled that the punishment was excessive; instead the club was relegated one step in the league.

A breakaway club, 1874 Northwich F.C., were founded by members of the Northwich Victoria Supporters Trust on 15 November 2012 following a vote by its membership to break away from Northwich Victoria and form a new, community-owned team, initially playing in Winsford. On the day of the vote, it emerged that the owner of Northwich Victoria had been declared bankrupt and therefore failed the FA's Fit and Proper Persons test.The founders chose the name 1874 Northwich, retaining links to the past whilst creating a distinctive name for the future; in order to avoid legal issues over the new club's name, none of the proposed options presented to supporters included the words Vics or Victoria. In their first season, at level 10 of the English football league system, 1874 Northwich finished third (one place below automatic promotion). However, due to the demise of Formby FC, who finished second, they were promoted. Since then 1874 Northwich have played in the ninth level, one level below Northwich Victoria.

They played at the same Drill Field ground for over 125 years, which at the time was believed to be the oldest ground in the world on which football had been continuously played. However, the Drill Field was demolished in 2002, and, after a ground-sharing period with their local rivals Witton Albion, They started the 2005–06 season in their new stadium, the Victoria Stadium in Wincham, just outside Northwich and across the Trent & Mersey Canal, which separated them from their rivals. A new ground was built in Wincham, a few miles outside of the town in the middle of a business park. It was named the Victoria Stadium, and was opened in 2005, with its official opening in 2006 by Sir Alex Ferguson. When the team was sold to Jim Rushe in 2007, ownership of Victoria Stadium remained with former owner Mike Connett, although Rushe always claimed that his purchase of the stadium was imminent. In January 2012, Rushe's planned purchase of the Victoria Stadium fell through, and the site was sold to chemical manufacturer Thor Specialities Ltd., who were based adjacent to the stadium and planned on expanding their operation. As a result, the club was evicted from the ground with immediate effect, with its remaining home fixtures of the 2011–12 season either played at nearby venues or switched to the ground of the away team. Victoria Stadium was then torn down.

The club then tentatively agreed to share Marston Road, the home of Stafford Rangers located over 40 miles south of Northwich, to enable them to gain readmission to the Northern Premier League for the following season. The club hoped to secure a ground share closer to their home town before the season started, and eventually agreed a lease on Flixton's Valley Road. However, the ground at Flixton did not meet ground grading requirements for the Northern Premier League. The club then unsuccessfully appealed the leagues refusal to allow the sub-standard ground at Flixton and followed this up with a second unsuccessful appeal as to their placement in the Southern division of the Northern Premier League. The club were forced to remain at Stafford, and were subsequently denied the appeal to switch to the Northern division due to the extra travelling for the away clubs. In 2013-14, Northwich Victoria were permitted to transfer to the Northern division and to play at Flixton's Valley Road. Finally, in 2015-16, Northwich returned to playing at Wincham Park as part of a renewed ground-share with Witton Albion. 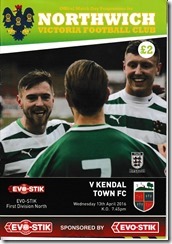