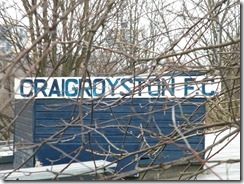 Craigroyston are one of the youngest clubs in membership of the East of Scotland FA. Their history extends back to 1976. In fact the only reason they came into being was because of the manager of Eyemouth United, Rab Melrose. Although associated with a club from the Scottish Borders, Melrose and several of his team emanated from the capital. In 1975, they decided it would be more sensible if they all came back to Edinburgh to start their own team, they did this the following year. They arranged to play their home games at the Craigroyston Community Centre in the north of the city, and decided to name themselves after their adopted home. Having sought and obtained membership of the East of Scotland FA, the new club gained distinction by reaching the final of the East of Scotland Qualifying Cup in their first season. They also got to the semi-final of the City Cup. The new club moved into City Park, which they shared with Spartans until as recently as 1998, when they moved to their current home, St Mark's Park, which is in the Warriston area of the city, near the Royal Botanic Garden. Craigroyston have not won many honours in its short history, but did taste success when the club lifted the Alex Jack Cup in 1993–94, the King Cup in 1996–97 and the First Division title in 2005–06 and 2012–13. 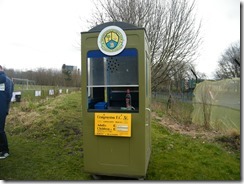 Our intended destination was supposed to be Preston Athletic we made our way over from Whitehill and arrived in the car park to find the game was off. It wasn’t raining but the ref had decided the pitch wasn’t capable of staging the game. We were faced with 2 options in the East of Scotland League Craigroyston or Civil Service Strollers. I decided on Criagroyston and quickly set off back towards Edinburgh. We parked up on the road along side the ground a bit of a tight squeeze on the roadside but anyone who arrived after us wouldn’t have a had a good spot.

The game itself was a classic encounter with Craigroyston Taking the Lead in the 19th Minute with a goal from Dale Pennycuick. Tynecastle then turned the game on its head with Goals from Scott Coleman and Stewart Adams in the 45th and 59th minute respectively but the lead was short lived as almost immediately Craigroyston equalized in the 60th minute with a goal from Stewart Fisher. In the 78th Minute Tynecastle thought they’d grabbed the winner with another Scott Coleman goal. But with only minutes remaining Keith Buckley headed in a corner to gain Craigroyston a share of the points. When I 1st Walked into the ground I wasn’t intending on staying the full 90 Minutes but as the game was enjoyable I stayed until the end 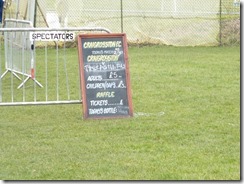