Esh Winning F.C. are a football club based in Esh Winning, near Durham, in County Durham, England. Football clubs in Esh Winning date back as far as 1889, including a team which won the Northern League in 1913. The latest incarnation of the club was formed in 1969 as the current version Esh Winning F.C. gained acceptance into the Durham and District Sunday League Third Division. Promotion was achieved in 1971, the Guards Cup was won the following season and in 1973 Esh Winning carried off the Division Two Championship. In 1975 there were victories in the Stafferi Cup and in 1976 the Earls House Sunday Cup. 1979 and 1980 saw Esh carry off back to back Sunday League Championships before spending the 1981–82 season in the Northern Alliance where a respectable sixth place was achieved. In 1982 Successful election into the newly created Northern League Second Division followed where Esh remained until 2002 when the club was promoted to Division One Although In the 2005–06 season the club got off to a slow start and were relegated back to the Second Division after 4 years in the Northern League top flight. There top flight record consists of a 17th 15th 14th and finally a 20th placed finishes. In the FA Cup they have reached the 2nd round of Qualifying twice in 1990-91 when they lost to Spennymoor United and in 2004-05 when they lost to Lancaster City. In 2008/09 they Finished 3rd in the Second Division and were Promoted back to Div 1. In 2009-10 they Finished 18th but they Following season they only Managed 4 Wins all season and were relegated in 21st Place. 11th in 2011-12 20th in 2012-13. 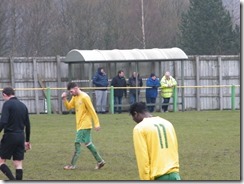 In 2013-14 They Finished 22nd after Ryton & Crawcrook who had been bottom of the Northern League Division Two virtually all season won their last game away to South Shields thus relegating Esh Winning. Although they Avoided Relegation because Whitehaven were classed as a relegated club as they had failed to bring the ground up to the required standard. Esh Winning remained in the Northern League for the 2014-15 Season Finishing 20th.
The Ground is just outside the town in an area called Waterhouses. It comprises of a Clubhouse and main stand with the rest of the ground mostly open although the far side does have some bus shelters for shelter away from the elements.
We made our way over the A69 and then down the A68, Turning off the A68 before Tow Law and heading towards Esh Winning following the Sat Nav down some country lanes. We got our lunch in the Co-op located in the town centre then headed up towards the ground if you didn’t know where the club was you’d miss the turn off when the round bends round to the left you go straight ahead into the forest and down a little track before arriving at the ground. 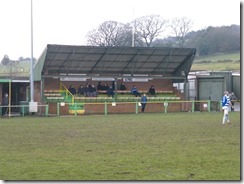 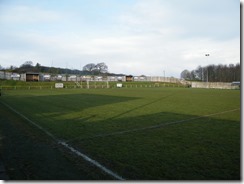 The game it’s self was an exciting one Esh led 2-0 with goals by Liam Clark and Adam Ward by the hour mark, but Chester fought back with an own goal and Craig Mickle Penalty to end the game 2-2 and give both sides a share of the points. The same survived the elements as nearby Durham was Abandoned due to snow. On the way back there was a fair bit of snow on the roads as we headed back towards Corbridge and Hexham but it was clear once you got down to the A69 Esh Winning seamed to avoid most of the snow. 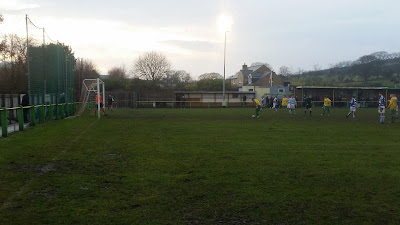 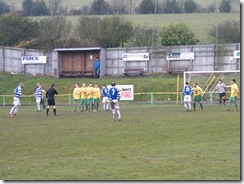 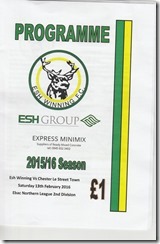