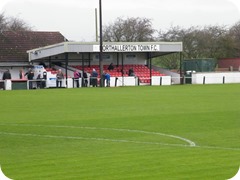 Northallerton Town F.C. is an English football club based in Northallerton, North Yorkshire. They were established in 1895 and continue on to this day. They are currently playing in Northern League Division Two. In 1982, they were among the founding members of the Northern League Division Two, they gained promotion to Division One by finishing second in 1989–90. They had huge success in the early 90s reaching the last 16 of the FA Trophy, finally losing to Farnborough Town; they also reached the 4th qualifying round of the FA Cup in 1992 and 1993, losing to Accrington Stanley and Witton Albion. Town also started to attract some undesirable support with crowd trouble at Accrington, Workington & Witton, however this was short lived, as was the club's success, going bust in 1994. The ground was sold off to a business man with no interest in football. Debts were cleared on liquidation; however the club then had to find rent on a monthly basis.The club changed their name to Northallerton F.C. 1994 in 1994, and were relegated back into Division Two in the 1994–95 season. They soon shot back up they secured the league championship during 1996–97 and were promoted back to Division One. They were relegated once more the following season though, and reverted their club name back to Northallerton Town in 1999.Northallerton Town are known for their loud and passionate home and away support – a section of the crowd are known as the 'Northallerton Town Casuals' and have a friendly rivalry with the North Shields 'Ultras'.
Honours

The game had been in doubt because of the heavy rainfall and the forecast of a lot more to fall but the Referee rightly gave the go-ahead for the game although the pitch was very heavy and the grass long. Shortly after the kick-off Channon North missed an opportunity although he looked well offside but early play suggested that the boggy pitch was going to present one or two problems. On 10 minutes excellent work by Iain Bickerstaff released Channon who was unlucky not to put Hebburn ahead. There was little action in either goal mouths although a great saving tackle from Chris Smith stopped a fine attacking move by the home side after 15 minutes and a great save by Phil Holgate on the half hour stopped a certain goal. At this stage Northallerton were shading the game and two minutes later a great move involving a slick back heel freed Reakes who hit a fine drive across Holgate to give the hosts the lead. Hebburn fought back and a strong drive by Iain Bickerstaff from outside the box flew inches past the post with the home keeper stranded and shortly after James Talbot should have done better when a great ball from Ross Toward left him clear of the Northallerton defence. One down at half time and the Hornets still in the game. Unfortunately that is the way it stayed as Hebburn battled in well and had more possession than the home team but never troubled the Northallerton goal. In fact Phil Holgate brought off two tremendous saves to thwart goal bound efforts which would have flattered the home side. Nevertheless Hebburn never looked like scoring. 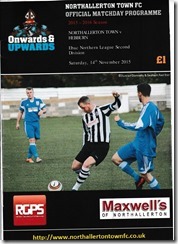