Liverpool Football Club /ˈlɪvərpuːl/ are a Premier League football club based in Liverpool, England. The club have won more European trophies than any other English team with five European Cups, three UEFA Cups and three UEFA Super Cups. They have also won 18 League titles, seven FA Cups, a record eight League Cups, and 15 FA Community Shields, though they are yet to win a Premier League title since its inception in 1992. The club was founded in 1892 and joined the Football League the following year.
Liverpool F.C. was founded following a dispute between the Everton committee and John Houlding, club president and owner of the land at Anfield. After eight years at the stadium, Everton relocated to Goodison Park in 1892 and Houlding founded Liverpool F.C. to play at Anfield. Originally named "Everton F.C. and Athletic Grounds Ltd" (Everton Athletic for short), the club became Liverpool F.C. in March 1892 and gained official recognition three months later, after The Football Association refused to recognise the club as Everton.The team won the Lancashire League in its début season, and joined the Football League Second Division at the start of the 1893–94 season. After finishing in first place the club was promoted to the First Division, which it won in 1901 and again in 1906. In 1906 the banked stand at one end of the ground was formally renamed the Spion Kop after a hill in KwaZulu-Natal.The hill was the site of the Battle of Spion Kop in the Second Boer War, where over 300 men of the Lancashire Regiment died, many of them from Liverpool. At its peak, the stand could hold 28,000 spectators. Anfield could accommodate more than 60,000 supporters at its peak, and had a capacity of 55,000 until the 1990s. The Taylor Report and Premier League regulations obliged Liverpool to convert Anfield to an all-seater stadium in time for the 1993–94 season, reducing the capacity to 45,276. In October 2012, BBC Sport reported that Fenway Sports Group, the new owners of Liverpool FC, had decided to redevelop their current home at Anfield stadium, rather than building a new stadium in Stanley Park. As part of the redevelopment the capacity of Anfield was to increase from 45,276 to approximately 60,000 and would cost in the region of £150m

This was my 4th Visit to Anfield The 1st came in March 2009 when I witnessed Liverpool Defeat Sunderland 2-0 My next was December 2009 when Arsenal went away with a 2-1 away win. I then made a last minute decision to go and Watch them play FC Anzhi Makhachkala in the Europa league in Oct 2012 they were to win that one 1-0. So to see my Team at Anfield was a great day but sadly it didn’t go as expected. They day started out by travelling down the M6 I had to go to Manchester 1st for work purpose but there was huge traffic delays and I only arrived in Manchester at 1915 I’d timed the run the previous 2 days and had arrived in Manchester 1845 so I thought I’d had plenty of time to make the 35 mile journey along the M56 & M62 to Anfield unfortunately I arrived around the ground at around 2010 but it took me till 2030 to get parked and get inside the ground. Anfield Road is one of the best atmosphere’s pre kick off and when the crowd Sings you’ll never walk alone I still get Goosebumps every time despite not being a Liverpool fan (even if all my mates are) so was a shame to miss this part of the game

So I’d missed the Liverpool goal but no sooner had I sat down than Carlisle surged forward and scored through Derek Asamoah. After 90 Minutes the game was level and after another 30 Minutes it was still Level so It went to Penalties. Liverpool then won 3-2 on Penalties but the Cumbrian’s were not outplayed and defended well. Sadly as a result of this game we lost our next game against bottom of the table Newport after some of the players were clearly knackered a result which most people expected. After the game I had to make a mad dash to the Petrol Station to fuel up as I’d just about ran out thankfully I just made it. Then I made the journey home with the rest of the 6000 Cumbrian’s not disgraced but so close to what could have been a cup upset. 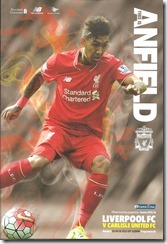 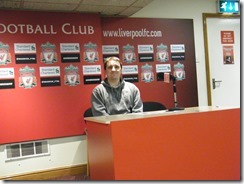 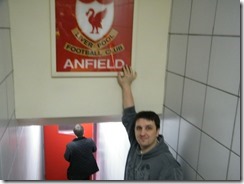 (Includes Photo’s from Sunderland Arsenal Anfi and Carlisle games and the club Tour which I did with Kids)
Posted by Cumbriangroundhopper at 15:08