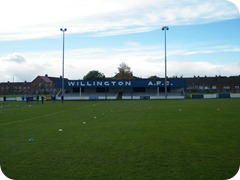 The Earliest formations where known in 1890 as Willington Rovers 1899 as Willington Rangers then Willington Town Wednesday in 1900 till 1903 they then became known as Brancepeth Colliery Rangers from 1903-1905 In 1906 they Became known a Willington Temperance. In 1911 they were admitted to the Northern League and the Temperance was dropped and they moved into the current ground Hall Lane. In 1914,1926 and then 1930 they won the Northern League. In 1939 they reached the Fa Amateur Cup final and were pitted against local rivals Bishop Auckland a game which took place at Roker Park Sunderland in which 20,200 folk attended and seen Bishop’s triumph 3-0 AET. The Bishop Auckland side included 20 Year old Bob Paisley who was sold to Liverpool a month later. 11 Years later and they were back again and once again Bishop Auckland were the opponents this time it was Willington who won the game at Wembley in front of 88,000 folk. Goals from Taylor,Rutherford,Larmouth and Armstrong meant that Willington ran out 4-0 Winners some of the highlights are available via the British Pathe Website. 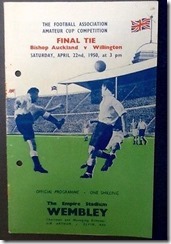 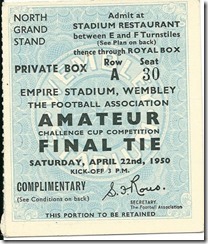 The next highlight of the clubs history came in 1973-74 when they reached the Fa Cup 1st round drawing Blackburn Rovers at Hall Lane. The crowd was 4,600 (or so), the wind was blowing a gale, the result a goalless draw. Willington should have won it, Tommy Holden missed a sitter with just a few minutes left, unfortunately they lost the replay 6-1 at Ewood Park. Blackburn donated Hall Lane’s first set of floodlights in return. After that there wasn’t much to shout about with the club nearly folding in 1996-97 The Club were relegated to the Wearside League in 2005 and once again in 2009 they nearly folded since then they have improved with promotion to the Northern League achieved in 2013. 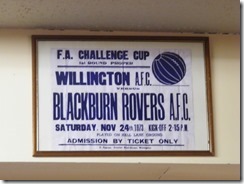 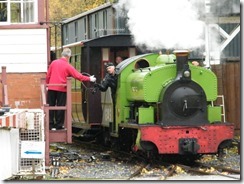 The ground itself has one seated stand along the far side and 2 terraces behind each goal with the changing rooms and refreshments on the near side The game itself wasn’t the greatest and chances were very few and far between. The 1st noticeable chance came when Levi Oman fired a shot over the bar on 40 Minutes for Whickham, 0-0 at Half time In the 2nd half it was Willington playing down the hill who were the stronger Corey Nicholson had a shot just wide and then another shot was saved and kicked out for a corner shortly after. Willington then got a Penalty for what I have no idea a shirt pull maybe, but Danny Lee on his 200 appearance sent the keeper the wrong way to give Willington the 3 points. The Full time whistle was greeted with a massive roar, after a 16 games winless run in League and Cup Willington who had not won since Aug 15th against Ryton & Crawcrook Albion will be relieved to get the 3 points but are still 3rd bottom of Northern League Division 2.  A game of few chances to be fair and the weather wasn’t great the bitter cold weather has started to appear in the north. On the way back we took the A68 and A69 which meant we were able to swing by Tow Law Town another ground I have not yet visited. 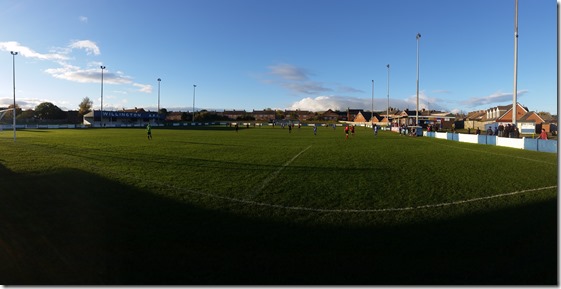 Miles from Carlisle 67 Miles or 62 Via Alston and Stanhope 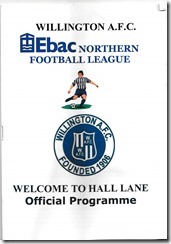 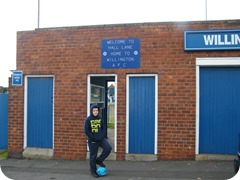 Ground Number 113 for Daniel
Posted by Cumbriangroundhopper at 11:19