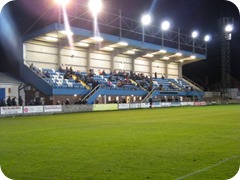 Whitby Town Football Club is an English football club based in Whitby, North Yorkshire. The club participates in the Northern Premier League, the seventh tier of English football. Founded in 1880, Whitby are one of the oldest clubs from the North Riding of Yorkshire, the club has spent their entire history in the amateur and semi-professional leagues, though they have reached the second round of the FA Cup in both 1983–84 and 1985–86.Whitby most prestigious honour is arguably the FA Vase, which they won in 1996–97 after defeating North Ferriby United at Wembley Stadium. Whitby play their home games at the 3,500 capacity Turnbull Ground on Upgang Lane. The club was founded as Streaneshalch Football Club in October 1880, soon after its foundation the club changed its name to Whitby Church Temperance and played a friendly game against Scarborough on 8 January 1881, which Whitby won 2–0. The name was changed in late 1882 to Whitby Football Club and continued to play friendly games as well as competing in the Scarborough & East Riding County Cup. During this early period Whitby and Scarborough's rivalry was tense: Whitby beat them in the final of the 1886–87 County Cup, before in the two seasons following Scarborough beat Whitby in the final.There was also a situation in the 1889 FA Cup where Scarborough knocked Whitby out in the First Round, with Whitby complaining that Scarborough's Recreation Ground was an illegal size.Unfortunately the rivalry culminated in one of the first football riots, after a disagreement about a goal, Whitby players were attacked on the pitch by Scarborough fans and eventually chased out to the Scarborough railway station. Nineteen-year-old Whitby player Albert Drabble, who was attacked at the game, died the following month of a heart attack, though links between the incidents were not conclusive it put a large shadow over the fixture. After World War One, the town of Whitby had two clubs, both playing in the Scarborough and District League, Whitby Whitehall Swifts and Whitby Town. Ever conscious of Whitby’s more illustrious past, the two clubs decided to amalgamate in 1926 as Whitby United. The new club was admitted into the Northern League and the club's name was changed to Whitby Town in 1949.  In 1983–84, Whitby came to national prominence when they came back from two goals down to beat Halifax Town 3–2 in the FA Cup first round proper. They were beaten by a late penalty at Wigan in the following round. The same season. In 1992–93, Whitby Town won the Northern League Championship for the first time in their history. Unfortunately due to circumstances completely beyond their control, the Club were denied promotion to the Northern Premier League.
Honours
Northern Premier League First Division Champions 1997-98
Northern League / Northern League Division One Champions 1992-93 & 1996-97
FA Vase Winners 1996-97
The Ground has a rather nice clubhouse which is underneath the big main stand built in 2006 which has a capacity of 505 named in honour of Brooks Mileson The Mileson Stand who of course is the former owner of Gretna FC and once tried to buy Carlisle United (thankfully he didn’t) .On the far side is a covered terrace behind each goal is open terraces. Sadly its hard to get good photo’s at night. 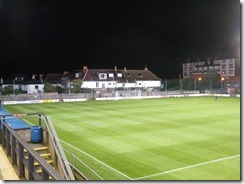 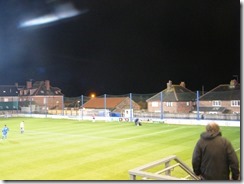 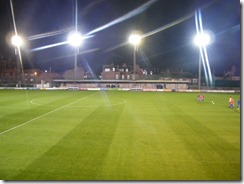 I’ve been meaning to tick Whitby off for some time now I’ve exchanged numerous Twitter messages whilst watching Whitby at Stafford a couple of years ago, when they had 2 former Carlisle United Players Playing. Sadly there was none in the side this evening. Jason Blackburn did sign for them in the summer after leaving Carlisle but has since left for Durham City. I was spending 5 days in Whitby with my Girlfriend and her parents staying at the very hospitable guest house Bramblewick which was only a short 5-10 minute walk from the ground. On the Wednesday me and the potential father in law decided to take in Whitby Town V Hyde United.
Unfortunately it wasn’t the result Whitby wanted as they suffered a 3-0 defeat Ayrton Bevins 2 and Scott Spencer with the goals for Hyde, that was the 3rd time I’ve seen Hyde and the 3rd win so the omens were probably against Whitby from the start. Before the game and after It I spent time in the Brilliant club shop talking to George and 2 Portsmouth Season ticket holders who had randomly arrived at the same time (In fact they sit in the same stand at Portsmouth but had never met each other before). I could have spent all night in there but eventually I settled on purchasing a Whitby 2014-15 home shirt for £20 and a few random programmes for £3. I donated a bag full of Carlisle Programmes as well to add to the growing collection.