For the 1982–83 season The Lancashire Combination amalgamated with the Cheshire County League to become the North West Counties League. Clitheroe became one of the founder members, however the state of the ground meant they started in the third division. There then followed one of the most successful periods in the club's long history when under the guidance of manager Eric Whalley they won the Third, Second and First Divisions in consecutive seasons. In the 1995–96 season when under the joint managership of Dennis Underwood and Gary Butcher they played at Wembley Stadium in the final of the FA Vase. Some 7,500 people watched the game against Brigg Town and although Clitheroe won against them earlier in the season in the FA Cup the club was beaten 3–0 in the Vase Final. A public appeal to help with the visit to Wembley saw £7,400 donated by townspeople and businesses. The last decade of the 20th Century saw most of the ten years spent getting the ground up to scratch with £130,000 being spent in the process. The sale of two players, Jon Penman and Carlo Nash, helped considerably with the expenditure on the ground. The club saw little success on the pitch after the Wembley visit until manager Steve Parry led them to the Floodlight Trophy by beating Kidsgrove Athletic 2–1 in the 1998–99 final. Carlo Nash, the former Preston North End goalkeeper also started his career here too, before being spotted by Crystal Palace

Shawbridge is a nice old fashioned non league ground money was spent from the sale of Carlo Nash and the Wembley finals to improve the ground back in the 90’s. You enter from behind the goal with a club house to the right on one side and a cover standing area with a rather quirky low roof along the left hand side. On the right along the side of the pitch is another covered terracing and behind the far side goal is a small covered terrace. On the left hand side is the sponsors lounge tea hut and then a small seated stand with the changing rooms behind it

Parking up on a side street I managed to get in just in time for KO a really enjoyable game Clithroe took this one 2-0 against an unbeaten Northwich Victoria Side Goals from Scott Bakkor & Callum Hendry (Colin Hendry’s Son on Loan from Blackburn) gave the young Blues team a well deserved win over the previously un-defeated Vics team. Now managed by former Stockport County Boss Jim Gannon. 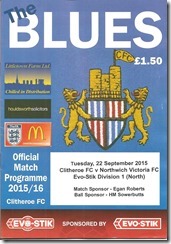