Maine Road F.C. are an English football club, based in Chorlton-cum-Hardy, Manchester. The club was founded in 1955 by Manchester City Supporters Rusholme. They currently play in the North West Counties Football League Premier Division and are members of the Manchester Football Association. They play their home games at Brantingham Road. The club was formed in 1955 by supporters of Manchester City under the name City Supporters Rusholme, when past Chairman Frank Thompson and a few friends formed a team and after playing a few friendlies. Soon after that, the club joined the local Rusholme Sunday League and Thompson became the Chairman. In the late sixties they changed to the Manchester Amateur Sunday league and also moved their headquarters to the newly built Maine Road Social Club, and that's when the new name Maine Road FC was born. A man called Ronnie Meredith was the driving force behind the club in the Seventies. in 1971–72 Maine Road won their first league Manchester County Sunday Cup and Cup Double. The success prompted Meredith to look for bigger challenges and he changed the whole future of the club by moving to Saturday football in the form of the Manchester League.
Maine Road won the Manchester Premier Cup in 1975–76, beating Abbey Hey in the final and again in 1976–77, when Maine Road beat Little Lever in the final. More success followed on the field and after several years of moving grounds, Club finally settled on a permanent home in 1980. Brantingham Road in Chorlton is where the club still play today. After an initial lean spell at the new ground, The club then won the Manchester League four times consecutively from 1982–83 to 1985–86. Throughout the same decade, they set a record by winning all five Manchester County Cups. Derek Barber took over the managerial reins in 1986 and the clubs progress continued so much so that when the Manchester County FA's new complex at Brantingham Road was built Ron's other ambition was achieved. Entry to the Bass North West Counties League. Maine Road moved into their present home, Brantingham Road in 1980. They upgraded it to become eligible to join the North West Counties Football League in 1986.Their record home attendance is 3,181 for a league match against FC United of Manchester on 4 November 2006. However, the game was played at Bower Fold in Stalybridge, the home of Stalybridge Celtic. Manchester Football Association used to have their headquarters at Brantingham Road before they moved to Salford Sports Village. They still hold their County Cup finals at the ground.

There isn’t much to Maine Road one long small stand down the side and a little one over the far side. I parked up along the road side but there is a few spaces in the car park. The game wasn’t the best but Ashton took away the honours with a 1-0 away win with Danny Smith Scoring the goal within the 1st 5 minutes. There is some better photo’s from the game here 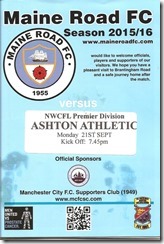