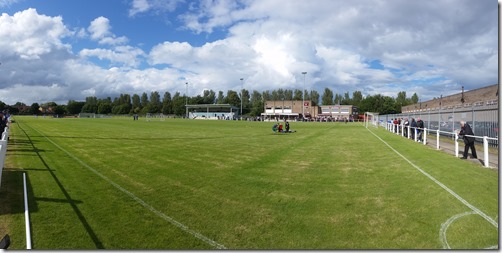 South Shields F.C. is a football club based in South Shields from 1974. It is the third club of that name. The club plays in Northern League Division Two at Mariners Park, formerly known as Filtrona Park. There was a South Shields (1889) and another South Shields (1936) The 1st South Shields was the most successful playing in the League they were elected to the extended Football League Second Division in 1919–20 with 28 votes. Its first League game was a 1–0 defeat at Fulham watched by 20,000 spectators, but although the team frequently attracted big crowds, playing success proved elusive. The club was relegated in 1928, and after two seasons in Division Three (North) the club folded in 1930 - despite finishing seventh - and was taken over in its entirety by Gateshead. The team played at the Horsley Hill ground during its Football League career. The Second side (1936) was formed in 1936–37 with financial support from the Shields Gazette. It joined the North Eastern League and enjoyed immediate success in both league and Durham Challenge Cup before war broke out. Gates often exceeded 10,000. Notable FA Cup results include a 4–1 defeat at Queens Park Rangers in 1970, and the 10 goal feat by Chris Marron – claimed to be an FA Cup record – in the 13–0 win over Radcliffe Welfare United in 1947. Following the collapse of the North Eastern League in 1957–58, the club played in the Midland League in 1959–60, the Northern Counties League in 1961–62, the re-formed North Eastern League in 1963–64 and the North Regional League in 1967–68. IN 1968 it reached the Northern Premier League. In 1974 South Shields reached the FA Trophy semi-final, losing 3–0 on aggregate to Morecambe, which it had beaten 6–0 and 7–1 in the League. Only 1,117 watched the home leg. At the end of the 1974 season the club failed, and - like its predecessor - was absorbed into Gateshead F.C.
The Current South Shields was formed in the same year as the previous club failed and the sale of Simonside Hall, given to the club by supporters. The re-formed club under chairman Martin Ford was based at the council's Jack Clark Park, and began a 17-year crusade for a home of its own. After two title winning seasons in the Northern Alliance, and an appearance in the quarter-finals of the FA Vase, Shields joined the Wearside League.
Ultimately, chairman John Rundle and his family provided the long wished-for new ground at Filtrona Park, which was re-developed and first used by the club in 1992. The club played at Filtrona Park, in Shaftesbury Avenue, between 1992 and 2013. The name Filtrona derives from the nearby Filtrona factory which manufactures cigarette filters. The Ground was also used in April 2003 by Gateshead FC who’s International stadium was having a new running track installed. For the 2013-14 and 2014-15 seasons, South Shields played at Eden Lane, Peterlee after being evicted from Filtrona Park. In May 2015,the club secured a return to Filtrona Park - which was renamed Mariners Park - after new chairman Geoff Thompson bought the facility 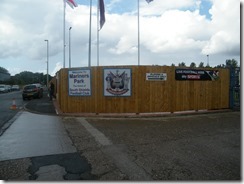 This should have been a relatively easy day out if I'd had the use of a vehicle unfortunately I didn’t my car had failed it M.O.T on the Friday with quite a lot of work needing done so I was without the use of it for the whole Bank Holiday Weekend. We studied the fixture list all week the original plan was to drive to Hamilton or another Scottish game but the car put paid to that then I considered the Away Fixture for Carlisle United at Hartlepool but the price put me off (I needed to save some money for the M.O.T ) So I decided to use the train to South Shields. The 1st stage was the 5 minute walk to the bus stop close to my house the (£4.40) bus journey to Carlisle train station took 10 Minutes. At the train station I had my Family Railcard to Renew which cost me (£30) and then it took the journey price for me and the boy down to (£18.55) which included the Tyne and Wear Metro All Zones as South Shields is in Zone 3. We Caught the 1135 to Newcastle, but got off at the Metro centre for a little bit of shopping before catching the 1345 to Newcastle Central. We then caught the Underground straight to Bede which is were Mariners Park is Situated close to, Its a short walk to the ground less than 5 Minutes 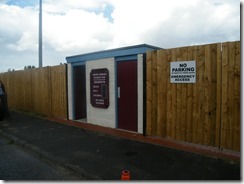 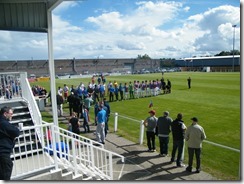 The Admission was £5 for me and £1 for the boy and a Programme was £1.50. Before the game the was a guard of honour for 84 Year old Richard Bailey who had been watching South Shields for 70 Years a fantastic achievement. The game kicked off and Ryhope went on the attack but it wasn’t long before the game was stopped Shield’s Adam Sakr went up in the air with the Ryhope Keeper but the keeper landed on top of him knocking him out and badly injuring him. The game was stopped for sometime and an Ambulance was called but after 35 Minutes the ref Abandoned the game as the Ambulance still hadn’t arrived. There’s not a lot you can do about things like that at this level. In the higher levels of the game you would have had state of the art Medics at the scene within seconds and the player probably would have been carried off into an awaiting ambulance or Medical room close by, But at this Level all of the Physio’s and staff are volunteers which means a phone call for an ambulance and sometimes a long wait, Its a good job his injuries weren’t life threating (It was over 90 Minutes before an Ambulance eventually arrived am told). 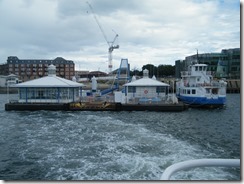 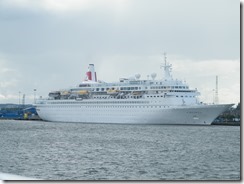 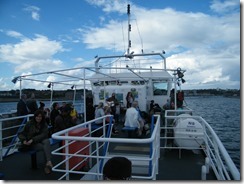 We left the ground at 1545 and decided to head out to South Shields and catch the ferry over to North Shields then Catching a bus to North Shields Metro Station and back on the Metro to Newcastle Central and home on the 1754 to Carlisle arriving home at 1932
It’s a shame I only got to see 4 Minutes of football but it gave me the opportunity to go on the South/North Shields ferry which I wouldn’t have otherwise had time to do all were included in the Tyne and Wear Metro Ticket I had bought from Carlisle. I’ll Probably be back as they are going for promotion to Division 1 and with any luck they’ll get to play Penrith or Carlisle sometime soon. Thankfully it looks like Adam Sakr will be ok The midfielder is now back home in Bishop Auckland, with suspected ligament damage to his shoulder, a black eye and a missing tooth. 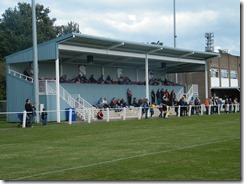 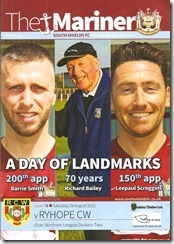