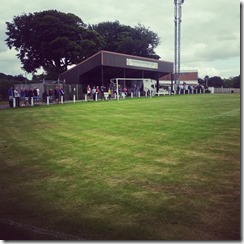 Whickham FC are an English football club based in Whickham, Tyne and Wear, playing in the Northern League Division Two in the English football league system. They won the FA Vase in 1981. The team plays its home matches at the Glebe Sports Ground, Rose Avenue, Whickham. NE16 4NA. There isn’t much to write about at Whickham, One main stand behind the goals then the rest is open with the dugouts on one side and a cricket pitch along the other 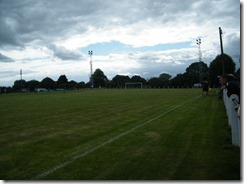 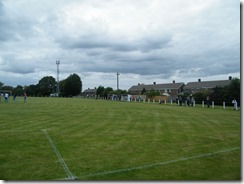 We made our way over the A69 for the this Sunday FA Cup fixture played on the Sunday due to the Cricket being played on the Saturday on the Adjoining pitch. The 58 mile journey took just over an hour quite easily along the A69 and then down the A1 before climbing the hill into Whickham. We parked on the roadside just by the stadium but there is a small car park at the ground. I arrived around 14:45 just in time for KO but was unfortunate that all the programmes had sold out due to a higher than normal crowd for the Sunday game. We stood along the side with regular hoppers Lee Stewart, Conner Lamb and Anders Johansen. Padiham took the lead in the 1st half when Andrew Hill headed in from a Corner a difficult header when he was going away from goal. In the Second half Padiham went 2-0 up Chris Turner Volleyed in from 25 yards out Whickham were awarded a penalty in the second half and Mark Fitzpatrick stepped up to make it 1-2

Whickham’s Penalty
Whickham were unable to get an Equalizer and went out to the strong North West counties side Padiham who had only just come down from the Evo Stik 1st Division North last season. At the end of the game I made by way back along the A69 arriving home just after 6pm thanks to Connor Lamb for the Photo’s of the team sheet and programme as I didn’t get one


Division :- Northern League Division 2 Although this was an FA Cup game 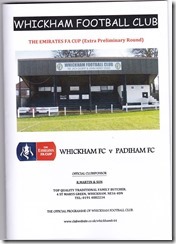 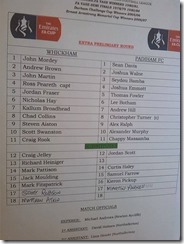