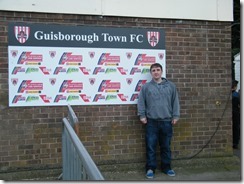 Down to 59 Games this season mostly due to Kids and Financial problems. I needed to tick of Cambridge and Luton to Recomplete the 92 both were done 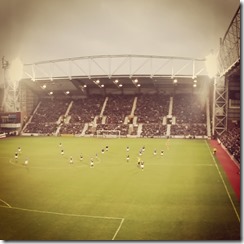 After last season I made my changes in life and set out on the path to restore myself to what I used to be like when I was younger We Started the Season off watching the CUFC side take on a Southampton U21 side on the training pitch in the hope that an immediate return to league one would be on the cards, but we were refused entry to the training pitches and had to watch from behind the fence in the car park, This probably set the tone for the season as despite relegation and a squad overhaul,we again struggled and the Manager was dismissed by the end of August after a drubbing at Cambridge, a game I visited to bring me back to the 92 (Luton in Feb Re-completed it ). A new manager was appointed and we remained near the bottom with very few highlights. I went away to Cheltenham, Cambridge, Shrewsbury, Morecambe, Luton and Burton. I had to Shelve plans to go to Portsmouth, Dagenham, Stevenage, AFC Wimbledon, and Newport for money reasons but they all stayed in League two for another chance next season (I’ve been to all these just not with Carlisle United ). Barnet came up so that’s another to add to the list I went there in 2013-14. I am trying to remain positive for CUFC in 2015-16 but it gets harder and harder every year to do so. This season’s summer has been just as worse as ever but I won’t go there (Another Story for Another Day).

I also Managed to get to 3 Celtic Nation games before they eventually folded at the end of the season the inevitable happened when the money ran out. It’s a shame as Gilford Park were a nice little club before Frank Lynch’s money came on the table even if they were only being watched by about 30 men and a dog. I did spend some time over the border watching Gretna 2008 as they went on a winning streak and seeing a game played at Annan to due to a problem with the floodlights caused by a storm.

Hearts did amazingly well as they romped to the title in the Scottish Championship no side could get near them all season. I was witness to the 10-0 demolition of Cowdenbeath and the Title celebrations against Queen of the South. They didn’t play any of the Scottish 4 grounds I need so they will roll over to next year

Money was tight last year hence the low amount of game and distance travelled although I did manage 10 New grounds at Murrayfield home off Scottish rugby (Celtic had to play their champions league qualifier there due to the commonwealth games being played at Celtic Park ) Also Holker old boys, Cambridge, AFC Blackpool, Guisborough, Warrington, Norton, Luton, North Shields and Cleator Moor Celtic.

Money was tight for various reason’s I made the decision to separate from my kids mother last summer and this affected the money side of things. In November I was able to move into my own pad and by April I finally switched to days after nearly 4 years on Nights which again I meant I lost my night shift rate but meant I was able to spend more time with the boys. I did spend more time this season watching local side’s like Carlisle United, Gretna, Celtic Nation and finally Penrith, and it was through watching Penrith that I finally met someone decent and as mad about football as me. From initially becoming friends when I went to Guisborough were now very much in love. Rather randomly she has over 100 grounds visited too watching Carlisle as a Child and then Gretna before now following Penrith with her brilliant Parents Richard and Janis. I was invited to the Penrith Christmas Party and then end of Season awards as I racked up 14 Penrith games home and away and will continue to do more next season. We’ve moved in together now and she’s absolutely amazing I couldn’t have managed without her over the last few months. I can’t wait to see what next season brings for me and Caroline. 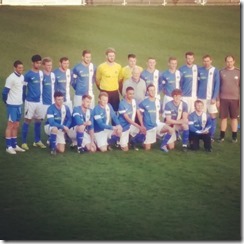 I’m still a 92 club member as Barnet and Bristol Rovers came up both grounds I have visited before so no worries there. The Scottish 42 still alludes me as I need Inverness, Ross County Peterhead and Elgin but I’ll get there at some point. just the 5 conference grounds to get to as well.

A Challenging season but enjoying never the less and I’ve also met a few new friends along the way.