Daventry Town F.C. is a football club based in the town of Daventry, Northamptonshire, England, formed in 1886. They are members of the Northern Premier League Division One South. The club was established in 1886 as a local-town club playing in the Northampton Town League.In the 2009–10 season Daventry won promotion to the Southern League Division One Central, by becoming champions of the United Counties League under the guidance of manager Ady Fuller.In 2014-15 They were transferred to the Northern Premier League 1st Division Southern Section. In June 2015 Iain Humphrey resigned as chairman and was replaced by Allan Smart, who relinquished his role as Daventry Town's manager in the process. Ady Fuller, who had served as Smart's assistant and had a previous spell as Daventry Town boss as well as stints as manager at Banbury United and Bedworth United, was appointed as caretaker manager in the interim period in June 2015. 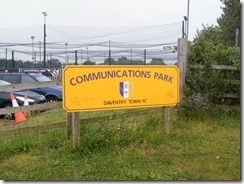 After being on a course for the week at the nearby Staverton park Hotel I decided to take in this match kicking off at 7.45. I made the short walk down from the hotel which didn’t take long there is a small car park next to the ground and an industrial estate along the road from the roundabout leading up to the ground. I paid the £4 entry fee but there was no programme or team sheet. The ground has 3 open sides to it with a 2 tier club house and small stands either side. Not sure what the capacity is but most sites list it as around 3000. There is a bar on the lower ground floor with a private function room on the top tier with a viewing balcony as well. 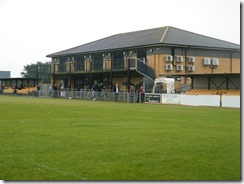 The game kicked off but I had no idea who was who so I was left to guess the goal scorers. Straight from the kick off there was a few late/bad tackles going in and Sileby had the better of the game. The ref was trying not to book players as it was a friendly but he lost control of the game and had no option but to send players off in the 2nd half. Daventry took the lead after 6 minutes, a corner from Simon King was headed in by James Tricks. Didn’t take Rangers long to equalize as only 10 minutes later they did so and just before half time Sileby took the lead to go in 2-1 up at the break. After the break the Daventry number 11 went on a run before smashing it past the keeper although the Daventry forward Aaron King may have got the final touch but I thought at the time it was already over the line. Tempers again flared and goal scorer James Tricks was asked to leave the field after venting his frustrations out on the ref after being stamped on by the Sileby Defender. The number 12 was also given a straight red card late on after again venting his frustrations out on the ref. That gave Sileby the incentive with the numerical advantage to steal the game late on with 2 almost identical goals both from free kicks first by number 9 then a second minutes later by number 14. The Daventry Website gave the Goal scorers for Daventry as James Tricks 16mins, Aaron King 75mins and for Sileby Brian Farrell 24/85mins, Stuart McMichael 37/86mins Although I had numbers 9 (twice) and 11 & 14 as the goal scorers Overall It was an entertaining game with both side committed to winning the game and you wouldn’t have known it was a friendly. 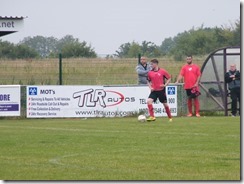 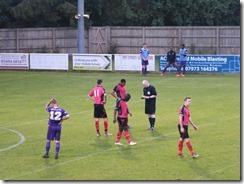 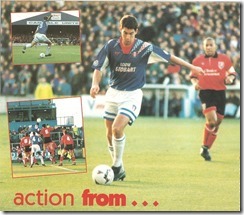 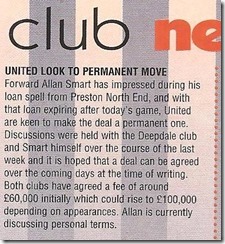 Allan signed on Loan for Carlisle United from Preston North End on Friday 24th November after rejecting a permanent deal to Lincoln and his 1st game came in a live TV Game against Wycombe Wanderers (I have actually got the recording of this on VHS) playing really well alongside David Reeves which left Carlisle Fan’s Singing song’s such as #Sign him up and #Smartie’s got the Answer. Allan played 3 games and 1 substitute game in a month. before returning to Preston. He later that season spent a month at Northampton town playing 1 game for them without scoring. United actually agreed a fee with Preston for £60,000 rising to £100,000 in January 1996 but the deal fell through for some reason.
In October 1996 Carlisle United sold David Reeves to Preston for £300,000 a deal which meant Allan came the other way he signed a 2 year deal and he scored his 1st goal on his debut for Carlisle in a 2-2 draw away at Rochdale at the end of the season he had 34 Appearances with 10 goals playing alongside Lee Peacock and emerging players such as Matt Jansen and Scott Dobie as Carlisle finished 3rd in the Third Division which meant Promotion to Division 2 and also winning the Autoglass trophy at Wembley (although Alan had to be taken off injured early on). In the 97-98 Carlisle season Allan picked up a foot Injury in only the 2nd game of the season at home Watford (of all teams), He later returned on Feb 24th against former side Preston North End in a 3-0 win overall he made 17 Appearances with 7 goals unfortunately Carlisle were still relegated that year as star players were sold on Lee Peacock Matt Jansen Rory Delap just to name a few. During the summer he was sold to Watford for around £100,000. He Won promotion the the PL in 99-00 with Watford and had loan spells at Hibs and Stoke. He later played for Oldham,Dundee United,Crewe, MK Dons, Bury, Portadown, Burscough and Southport.