Cleator Moor Celtic Football Club is an English football team founded in 1908–09. The Clubs plays in the Wearside Football League. Cleator Moor was founded in 1908–09 by Irish immigrants employed in the local iron ore mines. In the 1950–51 season, Cleator Moor reached the first round of the FA Cup, where they lost to Tranmere Rovers 5–0, in a match played at Workington. All other campaigns in the FA Cup have not seen the club progress past the second qualifying round. Famous former players include. Scott Carson played for the Celtic from Under 10s through to Under 16s and also made appearances with the Under 18s and the First Team before his recruitment to the Leeds United academy after being spotted playing for Workington in the FA Youth Cup. He turned professional with Leeds before signing for Liverpool. Whitehaven born Charlie Woods was transferred from Cleator Moor Celtic to Newcastle United in May 1959, making and scoring on his professional debut at Craven Cottage in a 4-3 defeat to Fulham F.C. Woods went on to play in the football league for Newcastle United, Bournemouth, Crystal Palace, Ipswich Town, Watford and Colchester United until he retired in 1971. Woods played 272 professional games scoring 46 goals. Charlie Woods became a coach at Ipswich Town where he began a long term coaching and scouting relationship with Sir Bobby Robson which carried on through Robson's England and Club management career. He became a close friend and confidant of Robson. Woods was sacked from Newcastle United in 2004, at the same time as Robson was disgracefully dismissed by then Chairman Freddie Sheppard.
I wasn’t intending to tick off Wearside league game but this seamed to good of an opportunity to miss. It doesn’t take me long from Carlisle to West Cumbria and with it being £2 admission and £2 it was a cheap day out . Parking up in the main Car park. I was able to meet up with Shaun Smith creator of the popular ground hopping website http://100groundsclub.blogspot.co.uk/ and David Stoker who had driven down from Livingston who’s blog is https://davesfootballtravels.wordpress.com/. The Monkwearmouth Charity Cup has been contested for since 1889-90 I got to pose with the trophy at the entrance to the ground. 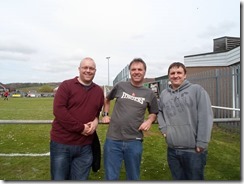 Stockton won the game 2-0 with both goals coming in the 1st half Kallum Hannah with the 1st and then Max Craggs followed it up with a 25 Yard effort. Stockton now have both the League title and the Ship-owners cup and this completed the treble with just Easington Colliery standing in the way of a quadruple in the League Cup final 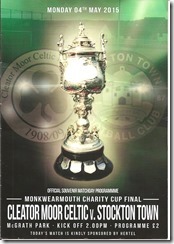