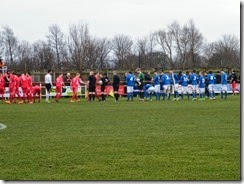 North Shields F.C. is a football club based in North Shields, England. They have reached the 2nd round of the FA Cup twice in their history – in 1933–34 and 1982–83. Following their promotion from Northern League Division Two, they currently compete in Northern League Division One. They also won the FA Amateur Cup at Wembley in 1969, beating Sutton United. The club was formed in 1896 as North Shields Athletic, and began playing in the South Shields and District League. The club moved to Appleby Park, Hawkey's Lane in about 1900. Their record attendance was 12,800 for the local derby with South Shields in 1936. The ground was one of the finest non-league stadiums in the country and disputably the fourth best in the North East after St James', Roker and Ayresome Park. The stadium was blighted with subsidence problems having been build on the site of a former colliery and it wasn't uncommon for holes to appear in the pitch, one of which developed during the course of a game and resulted in a home player ending up waist high in a hole. North Shields played at Appleby Park until 1992 after the club encountered financial difficulties and subsidence at the ground forced the club into selling the land. The stadium was eventually sold to developers and by 1993 the stadium was replaced by new housing. The site is now replaced with a street named after the old stadium, Appleby Park.  After 2 years of playing at various grounds around the Wallsend area the club finally reached an agreement with North Tyneside Council and a new ground known as "Ralph Gardner Park" was built in the Chirton area of North Shields. 2010–11 saw the commencement of a sponsorship deal with local funeral director Daren Persson which has seen the stadium carry his name. The stadium is affectionately known as "The Morgue" to the North Shields "Ultras" supporters. Attendances at "RGP" has been known to pass the 300 mark on occasions. The ground has covered seating and standing areas. The record attendance for the stadium is 1,312, Although this is set to be broken soon when the club plays the Fa Vase Cup Semi Final on 28th March 2015 The club have been managed by former Blackburn Rovers and Aston Villa player Graham Fenton Since April 2012. 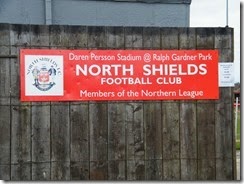 Me and the boy started off by catching the 1135 Train to Newcastle changing at Newcastle onto the Metro towards North Shields, We took the 10 minute walk from North Shields Metro to the Stadium through some side streets reaching the ground at 1400. There’s nothing much to the stadium although Permission has been granted for them to build a new club house on the land adjacent to the stadium on Dec 2013 but as yet no work has began. There is one small covered seating accommodation and 2 small covered terracing.
= 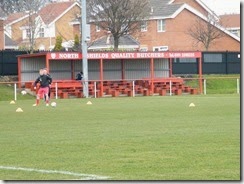 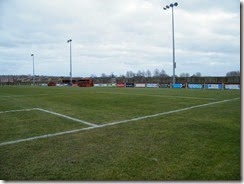 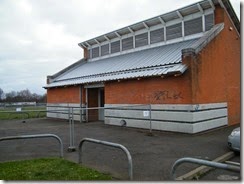 Penrith and North Shields shared the points in this game but either side could have won it North Shields took the lead in the 16th Minute when Forster sent Bainbridge through on goal the striker making no mistake to slot past Blues Keeper Richardson. Almost immediately Penrith Replied when Jack Elliot seized on a bad pass in the Shields defence to laid the ball up for Martin Coleman to score to make it 1-1 after brushing off the attentions of the Shields defenders and that’s how it Finished. Penrith Goalkeeper Josha Richardson had a fine second half as he kept out the Shields Attack. 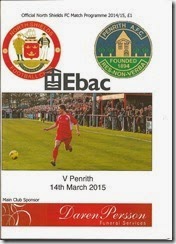 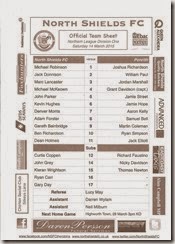