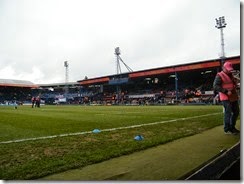 Luton Town Football Club is an English football club based since 1905 at Kenilworth Road, Luton, Bedfordshire. Founded in 1885, it is nicknamed "the Hatters" and affiliated to the Bedfordshire County Football Association. Its first team is contesting the fourth tier of English football, Football League Two, during the 2014–15 season. The club's history includes major trophy wins, several financial crises, numerous promotions and relegations, and some spells of sustained success. It was perhaps most prominent between 1982 and 1992, when it was a member of English football's top division, at that time the First Division; the team won its first major honour, the Football League Cup, in 1988. Luton defeated Arsenal 3–2 in the 1988 Football League Cup Final
Kenilworth Road is a football stadium in Luton, Bedfordshire, England. It has been home to Luton Town Football Club since 1905 when they left Dunstable Road. The ground has also hosted women's and youth international matches.The 10,356 all-seater stadium is situated in Bury Park, one mile (1.6 km) west of the centre of Luton. It is named after the road which runs along one end of it, but the official address is 1 Maple Road. Kenilworth Road. The ground is known for the artificial playing surface which was present from 1985 to 1991, the unusual entrance to the Oak Road End, and the five-season ban on away supporters that Luton Town imposed following a riot by visiting fans in 1985. Floodlights were fitted in 1953, and the ground became all-seated in 1986. The record attendance of 30,069 was set in 1959, in an FA Cup sixth round replay against Blackpool. The ground is located about half a mile away from Luton railway station, which lies on the Midland Main Line between London's St Pancras railway station and Leeds's City station. Many of the roads near the ground are for residential permit holders only, meaning car parking at the ground is notoriously difficult. . The Luton to Dunstable Busway includes a terminal behind the Main Stand on Clifton Road as part of the A, B, C and E routes running between London Luton Airport and Houghton Regis. 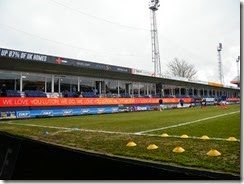 With Luton’s Promotion back to the Football League in May this became next on my hit list along with Cambridge (which was done in August) .With the fixture list out in June my sights were firmly set on a Valentine’s weekend in London with a prospective new girlfriend. I had 8 Months to carefully select the next lucky girl, unfortunately I didn’t expect my choice to be an avid Penrith AFC fan and thus she decided to go Durham V Penrith instead. So I was left with usual co-pilot Adam Sheridan and friend Degsy as well as my 11 Year old Son Daniel. We decided on a 1 day return Journey making the 277 Mile Journey each way from Carlisle in a day . We set off from mine at 0730 collecting Adam Just after then Degsy at Penrith McDonald's around 0815. We grabbed Brekkie in McDonalds then set off Down the M6. We decided to take the M6 Toll (£5.50) and stop for a break at the services on the toll road for a quick toilet break. We continued on the M6 before Joining the M1. We were made aware that there were some problems up ahead between Junction 14 and 12 on the M1 so we decided to come off at Junction 14 and head down the A4146 and A5 Towards Dunstable We eventually came into Luton on the A505 but struggled to find somewhere to park after driving round for 30 Minutes we eventually found the Beech Hill Conservative club car park for £4 just off Leagrave road. We then went for some food at one of the many fast food restaurants on the main street outside the ground. The Streets and surrounding area’s can only be best described as overwhelmingly run down. 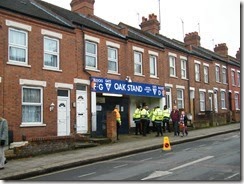 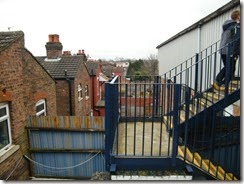 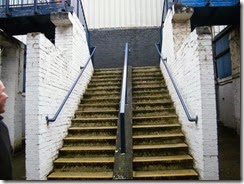 The Away end is located down Oak Road and the turnstiles are below someone’s house with the steps into the stand located above there back garden. The ground itself is again run down but is all seater and the view’s aren’t great with some views obstructed by the pillars its hard to believe this ground hosted top flight football. The game wasn’t the best for Carlisle United as they went a goal down on 40 Minutes through Cullen. For the last 25 Minutes Luton were reduced to 10 men when Luke Wilkinson was sent off for bringing down Antony Sweeney. Carlisle went close late on when David Amoo and Danny Grainger blazed shots over when they should have done better. Not a good performance by Carlisle but a late rally could have salvaged something. 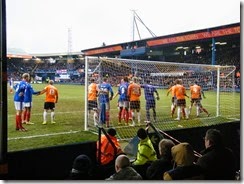 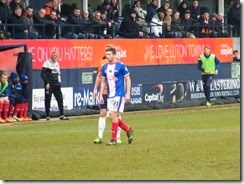 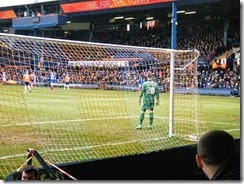 After the game we made our way back home stopping off at Walsall to refuel at the Morrison’s which is built on the site of there old Fellows park ground which is still quite close to the Bescot Stadium. we managed to get back to Carlisle for around 2230 although it did take a while to get out of Luton itself.

The overall aspect of the day was forgettable but the Programme and set up at Luton seams very well organised and one can see them attaining promotion to the next tier at some point soon. They had numerous chances and should have killed us off long before going down to 10 men. We were made very welcoming by the staff and you only have to look at the way John Still and his players saluted the crowd at the end to know that they are doing things the correct way the near lap of honour at the end of the game shows a real class about the organisation of the team. You read through the programme and note how forward thinking the club is, how they appraise the support they get after a rough few years in the Conference. Luton is an easy enough place to get to by road, but i don’t envisage going back there again unless they have a new stadium something which they really do need. 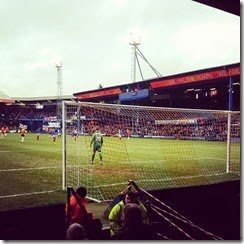 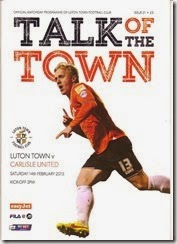 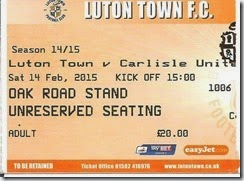 It’s always pleasing to get back up to the 92 but with only 4 conference grounds left to visit hopefully I can stay on 92 for next season no offence intended to Dover, Eastleigh, Forest Green or Braintree but I’d rather they didn’t come up this season. Its looking likely Barnet plus one other my tip or should I say hope is that Macclesfield or Wrexham get up this season, perhaps even Gateshead, but that is of course if Carlisle remain in League 2. Relegation is something which is unthinkable to most Cumbrian’s but a possibility given recent results. As it stands I have the 4 Scottish Grounds (Inverness, Ross County, Elgin and Peterhead) left to do and the 4 Conference grounds stated above. In the Conference North 6 grounds evade me (Boston, Brackley, Colwyn Bay, Gainsborough, Oxford City and Lowestoft). Very soon I am about to return to day shifts after 4 years on nights, So hopefully I can start doing a few Tuesday night matches although funds will be tight as I take a slight pay cut to return to days, something I have longed for since September when making the decision given the change in my life away from football. 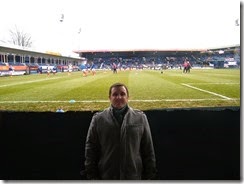 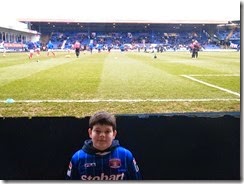