Norton United F.C. is a football club based in Smallthorne, Stoke-on-Trent, Staffordshire, England. They were established in 1989 and joined the Staffordshire Senior League in the same year. They were the Midland League champions three times, North West Counties Football League champions in 2013–14, and were promoted to be members of the Northern Premier League Division One South . The club's ground is the Norton Cricket Club & Miners Welfare Institute. They play in black and red striped shirts, black shorts and black socks. The Evo-Stik League Division One side were playing their eighth game since their cup run began in the preliminary round in August.

This was quite a easy one to do I managed to secure an extra shift which meant I would be passing Stoke around the time of the game so with the help of North East based legendry hopper Shaun Smith I managed to secure a ticket for the game for a bargain price at £10. The Fa Cup coverage has returned to the BBC hence why 10 games where moved to the Sunday which meant I was free to pick up an extra shift. I drove down the M6 to Stoke Junction 16 then heading down the A500 just like I do every night with work

. I came off at the Burslem turn off and headed through Burslem on the B5051 before parking up on a near side street.

Shaun met me at the entry turnstile and handed me my ticket Also there was John Main and Tony Morehead. We stood in the 1st half behind the goal Gateshead were attacking, Rodman and Ramshaw (2) giving the Heed a 3-0 H/T lead. In the second half we swapped ends and stood behind the opposite goal to which Ramshaw completed his hat-trick with in the 74th Minute. After the game I made my way back to the Van and was surprised to bump into John McClure standing next to what was obviously Tony Moreheads car (The Man City Stickers gave it away). We had a quick chat before I headed back to my van and onto work in the East Midlands region. Returning home well after 11pm

Ex Cufc Watch Penrith Born Lewis Guy came on as a second half substitution having joined Gateshead from Carlisle in the Summer. Lewis Started off at Newcastle making 1 appearance in the Uefa Cup before making a loan switch to Doncaster which later became permanent in 2005. He had 5 years there but went on loan twice, once to Hartlepool and then to Oldham before moving to MK Dons in 2010 he had Loan spells at Oxford whilst there. In Jan 2012 he was released from his contract in order to sign for St Mirren and stayed there until July 2013 when he was released from his contract to sign for boyhood club Carlisle United. He signed a 1 year deal and stayed for the full season Starting 15 games and 28 appearances from the Bench scoring only 2 Goals. 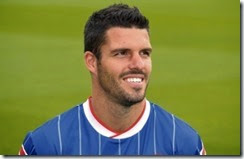 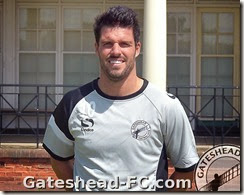 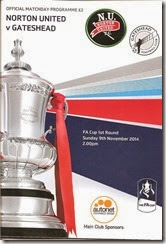