Warrington Town Football Club is an English football club based in Warrington, Cheshire. They were established in 1949 under the name of Stockton Heath Albion, adopting their current name in 1961. The club are currently members of Division One North of the Northern Premier League, in the 8th tier of the English football league system, and play at Cantilever Park. After its formation, the club initially played at London Road. In 1965, the club moved to Cantilever Park, which has a capacity of 2,500 as of November 2014. It takes its name from the Cantilever Bridge, a high-level road bridge on Ackers Road over the Manchester Ship Canal that towers over the ground to the east. The ground itself is on the northern bank of the canal.

Well it’s that time of year again and it’s FA Cup time the Friday night fixture was in my diary from the minute the TV fixtures were announced, yes this one was selected for live TV coverage on a Friday night ideal for my work commitments after securing the night off. I made my way down the M6 towards Warrington and Junction 21. £15 was the entry fee which had to be booked in advance I booked it in the Exeter end as the Warrington end was a sell out although there was no segregation on the day. I parked up in the Co-op car park which was a short walk up the road from the ground, On a normal day you probably would be able to park closer but with 2,500 expected the surrounding roads were jam packed.

I’ll be short and sweet with this blog as with other things happening in my life. I just haven’t had time to compile a proper report. but Warrington Managed to win this one 1-0 in front of the TV Camera’s. Defender and plasterer Craig Robinson headed in the winner on seven minutes, Warrington Managed to hold on for the win despite some heavy Pressure late on. The BBC website has a full report here

It’s nights like these you remember why I started ground hopping the atmosphere towards the end was electric and at the final whistle scene’s of jubilation that I have not seen for a while made me realise the journey was worth it. After the game I followed the sat nav back to the M6 at Junction 21 and was back home for around midnight. 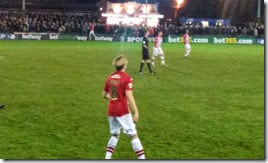 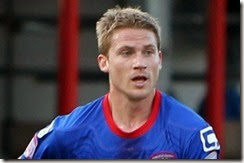 Ex Carlisle watch
Christian Ribeiro Came on loan to Carlisle for 2 months in the 2011-12 season. Playing 7 games Speaking about his time at Carlisle he said
“I was really impressed with Carlisle when I was there It was a very honest group of people at Carlisle, and I really enjoyed my time there. “They pick up guys who haven’t made it or established themselves at other clubs and give them a sense of belonging. Everyone was pulling in the same direction.“It was a very good place to work and I’m very surprised where they are in the league. “When I was there they were in the top eight and I thoroughly enjoyed playing under Greg Abbott, who is a very good manager. Had things worked out how Ribeiro had hoped he would still be wearing a Carlisle shirt. The two-cap Welshman, who has a Portuguese father, joined Carlisle on loan from Bristol City in November 2011 to cover for the long-term absence of the injured Frank Simek.  “Things went well for me personally at Carlisle and, if anything, I would have liked to stay longer,” said Ribeiro. “I learned such a lot when I was there and was settled even though I was living a long way from home. “Frank Simek was injured and I was filling the gap. In the summer there was a little bit of talk because Frank was out of contract but he is very highly thought of so there wasn’t too much speculation about him going.” Instead he penned a two-year deal with Scunthorpe in the summer of 2012 The club announced on 8 May 2014 that he would be released at the end of the season, despite playing 21 games as they won promotion back to League One. On 21 August 2014, Ribeiro officially signed for League Two side Exeter City after a successful pre-season trial. Ribeiro was a regular at various youth levels for Wales including taking part in the under-19 squad that played in the Milk Cup in 2007. On 12 November 2007 he was called up for the Wales U21 team for the matches against Bosnia and Herzegovina U21 and France U21, playing in both. He was first called up to the senior squad for the 2010 World Cup qualifier against Russia in September 2009 but did not leave the bench. Ribeiro made his debut for the Wales national football team on 23 May 2010 against Croatia at the Gradski vrt stadium, Osijek. 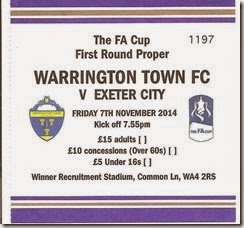 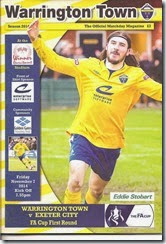