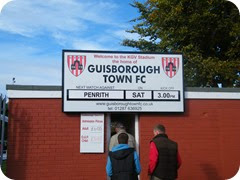 Guisborough Town F.C. are an English football club based in Guisborough, North Yorkshire. They were founded in 1973 and currently play in the Northern League Division One. Their home ground is the King George V Ground (sometimes abbreviated to 'KGV Ground') in Guisborough. Guisborough Town Football Club formed in 1973 and after winning the Middlesbrough & District League and the South Bank & District League they were soon entered into the Northern Alliance. There is however evidence to show that there were football teams in the town as Guisborough pre-dating them, such as Guisborough Belmont Athletic as far back as the 1920s, and a team named simply Guisborough from the 1940s.Guisborough finished top of the Northern Alliance in the 1979–80 season, and reached the final of the FA Vase tournament that same season, losing 2–0 to Stamford FC at the original Wembley Stadium. Guisborough then played in the Midland League for two seasons, ending in 5th position in both occasions, before becoming a founding member of the Northern Counties East League where they played for the next three seasons. In 1985, Guisborough joined Division Two of the Northern League. After spending just two seasons in the league they were promoted to Division One, having finished second in Division Two in the 1986–87 season Guisborough remained in Division One for the next eighteen years, before being relegated back to Division Two at the end of the 2004–05 season after being docked six points for twice fielding ineligible players. The club completed an excellent season in 2010–11 where they only lost 6 League games and finished Runner's Up earning promotion to the First Division (2011–12). During the 1988–89 season, Guisborough made their sole appearance in the FA Cup First Round, narrowly losing 1–0 to professional side Bury at Middlesbrough's Ayresome Park. Daniel Johnson scored 59 goals in the 2013-14 season and won the Northern League Young Player of the Year. He’s now sealed a transfer to Championship side Cardiff. Record Attendance: 3,112 v Hungerford Town in FA Vase semi-final 2nd leg, 29 March 1980. 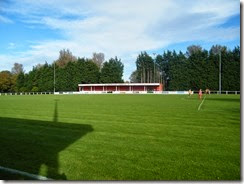 Me and the lad set of from Carlisle Down towards Penrith and over the A66 towards Darlington and Middlesbrough We spent time at Crazy Corner Soft Play centre in Thornaby before heading over to Guisborough for the match grabbing something to eat at the Subway just outside Guisborough a drive thru may I add. 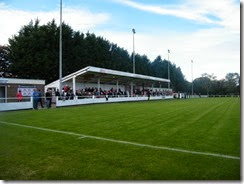 We arrived at the ground for 14:45 parking up in the small car park outside the ground, A small ground but it looked very well looked after. One thing I did notice was there was a large presence of kids watching the game and playing football behind the goals, which obviously bodes well for their future an open ground with large grassed areas dotted around. 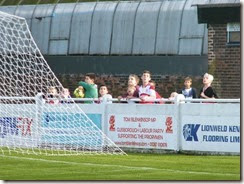 The Match kicked off with Penrith having to name their manager in the starting line up and only a goalkeeper on the bench. In the 1st Half Penrith were slightly the better side but both sides had few chances. In the 2nd half Penrith took the lead when Ben Jackson had a shot from the edge of the area which sailed into the net on 54 minutes a fine finish. Guisborough then came into the game a bit more on 66 Minutes Luke Bythway charged down a clearance and was able to score. With 10 Minutes reaming Penrith had to use their sub Keeper when Richardson was replaced suffering a suspected broken finger, Tom Newton came on to replace him. Penrith then managed to hold on till the end but had chances of their own to snatch an away win. 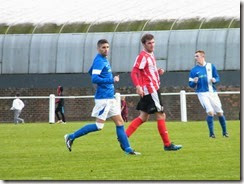 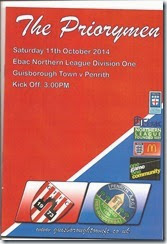 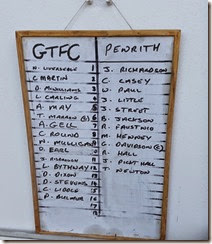