AFC Blackpool was formed in 1947 under the name of Blackpool Metal Mechanics and played at Stanley Park for two years before moving to the current Jepson Way ground.  In the summer of 2005 Blackpool Mechanics FC merged with Lytham St. Anne's FC who had just won the West Lancashire League Division One title. Lytham St. Annes resigned from their own league and have brought their resources and manpower to Jepson Way in a bid to launch the new look Mechanics in their push up the non-league football pyramid. The club was re-named AFC Blackpool in May 2008 when Blackpool Mechanics FC and Squires Gate Junior FC got together to form one club. It was decided to mark the start of a new era by re-naming the club and the name 'AFC Blackpool' was chosen. The club leased a further piece of land adjacent to the ground in Jepson Way to accommodate the enlarged club and investment to improve the facilities was begun. The club ground in Jepson Way retains its name 'The Mechanics' to maintain a link with the past. Season 2010/11 saw the club have probably its best season ever. The first team were promoted to the Premier Division as Div.1 champions with a record breaking 28 wins and three draws in 34 league matches. They also reached the semi finals in both the 1st Division Trophy and the League Cup.
We set of for Blackpool on the Friday night staying over and going to see the lights and spending the day touring the sea front before heading up towards Squires gate around 1300 we had lunch at the Air balloon near the soon to close Blackpool Airport. Heading to Jepson way for 1445 parking in the car park adjacent. The 2 teams shared out the points in this trilling encounter The opening goal from Stockport was a excellent free kick from Luke Gibson. 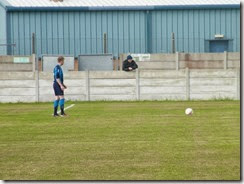 Aaron Dwyer then added a second to put the 10 man away side 2-0 up but the away side failed to hold on Ben Singleton pulled one back from the Penalty spot then Kevin Ford levelled with 20 minutes left. As for the sending off I didn’t even see it but it was a straight red card. 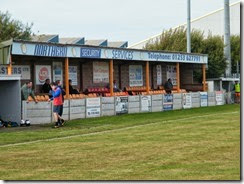