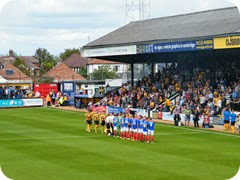 Cambridge United Football Club is a professional association football club based in Cambridge, Cambridgeshire. The club participates in League Two.Cambridge United have had two spells in the league's second tier, and reached the quarter-finals of the FA Cup twice and Football League Cup once. United's highest ever finishing place in the Football League is fifth in the Second Division during the 1991–92 season, narrowly missing out on being promoted to the first tier and becoming founding members of the Premier League. The club is based at the Abbey Stadium on Newmarket Road, approximately 1.86 miles (3 kilometres) east of Cambridge city centre. Cambridge United currently play their home matches at the Abbey Stadium, which has been their home since 1932. Since 2009 the ground has also been known as The R. Costings Abbey Stadium through a sponsorship deal. The stadium currently has a capacity of 9,617, of which 4,376 are seated 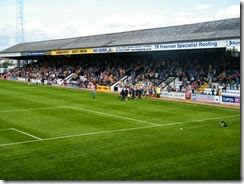 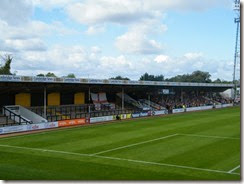 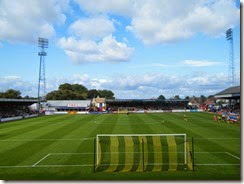 Having left Carlisle at 9am I swung by Stafford to pick up fellow Cumbrian now residing in Merseyside Lee Rooney. After that we drove to Junction 2 of the M6 and Parked up on an industrial Estate. Before being collected by another Cumbrian and long time friend Jonathan Ayers now Residing in Coventry who drove us from there to Cambridge. We parked up on a nearby housing estate and had some fish and chips at the Cod father fish and chip shop and after a short wait for chips we tucked into them and i must say they were rather nice. We made our way round to the turnstiles paid the entry fee but by full time I probably wish I hadn’t. Despite a Bright start Issa Diallo drove in from just outside the area to open the scoring on 25 Minutes from then on it was all down hill. Diallo then crossing for Simpson to head in a second on 33 Minutes. Simpson scored the 3rd when he turned in from Tom Elliott's cross on 45 Minutes Jayden Stockley scored two in five minutes, heading in Greg Taylor's ball before flicking in from Bobby-Joe Taylor's free-kick on 83 & 87 to wrap up an easy win for United. Carlisle were poor as soon as the 1st goal went it the heads went down. There were severe calls for Kav’s head after this and on Monday morning the board dually obliged and dispensed with his services, which is a shame as I liked him as a player and always had a lot of time for him but it just didn’t work for him as manager. As things stand no manager is in place yet and where bottom of the league again so things don’t get much worse. After the game it was back to the Car and over to Coventry I then Dropped Lee off at Nuneaton and after a quick pint in the Railway Tavern he caught the train home whilst I went back to Coventry to spend the evening with my long term pal Johnny with his lovely family. Whilst the last few weeks and months have been hell to say the least, time is a great healer and without his constant phone calls everyday not sure how I would have coped,but it’s onwards and upwards for here on in. This was me back up to 91 in the 92 club just Luton left to do on Valentines day to recomplete. 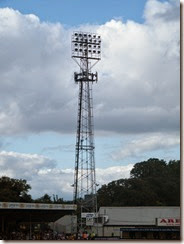 Miles from Carlisle 288 Via Coventry 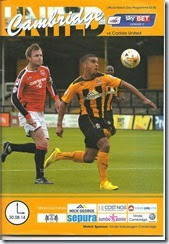