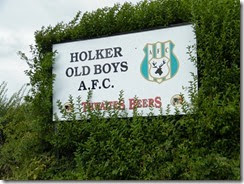 Holker Old Boys are an English football team based in Barrow-in-Furness, Cumbria. The club play in the North West Counties League Division One. The club originally competed in the West Lancashire League. They joined the North West Counties Football League Division Two for the 1991–92 season. In their first two seasons in the league the club finished 15th out of 18 clubs. In the 1993–94 season they finished third and were promoted to Division One, where they spent the next five seasons, but struggled each season, their highest league position coming in the 1995–96 season when they finished 11th out of 22 clubs. They finished bottom in the 1998–99 season and were relegated back to Division Two. In 2008, the divisions of the North West Counties League were renamed, so since 2008–09, Holker Old Boys find themselves back in Division One.
Their game against F.C. United of Manchester in the 2005–06 season was held at Craven Park, the ground of Barrow Raiders Rugby league team to accommodate the fans that FC United brought with them. The match attracted 2,300 fans, breaking the club's record attendance.
Holker Old Boys' home ground is at Rakesmoor Lane, just across the road from Barrow Golf Club on the outskirts of the town. There is limited seating in the small stand which is situated behind one goal. Being close to the sea the ground often suffers from strong winds which blow end to end down the ground, which has a small clubhouse which serves food and drink. The largest attendance for a game held there is 1,240, against Barrow in a cup match in 1995 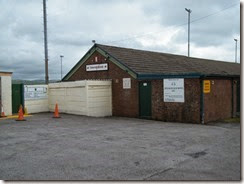 We made our way to Rakesmoor Lane for 2.45 Its quite easy to find as it’s next to the Golf club parking is small but so are the Attendances. Holker Old boys and Ashington were both hoping for Lucrative cup runs. In the end they both had to settle for a replay. On 2 Minutes Reid put Patterson through on goal for Holker but Ashington Keep Bannon was down to save well. In the 10th Minute Glen Taylor turned well to fire past the keeper and put Ashington ahead. 10 Minutes later Patterson Equalized for Holker after some good work down the left. On 27 Minutes Johnson fired Ashington back ahead after playing a 1-2 with Walton he went clear down the left after side footing the defender managed to smash the ball into the net. A dangerous looking ball by James Novak went across the face of the goal before Walton was not far away with two efforts - a free kick then a 25 yards volley - before Elliott’s intelligent pass saw Glen Taylor sky over a great opportunity with his left foot. Dan Patterson's drive tied the scores up at 2-2. Bannon foiled Brough when the striker was through one on one then after the latter’s effort had smacked against the foot of the post, Jamie Patterson's drive with the last kick of the game, crashed off the crossbar. So a replay it is. After the game we made the return journey back up to Carlisle. after Finally ticking off all the Cumbrian clubs to that level (Carlisle,Barrow,Workington,Kendal,Penrith,Celtic Nation,Whitehaven and now Holker Old Boys) 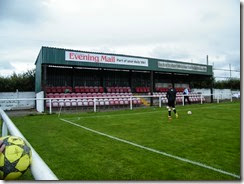 Ex CUFC Watch
In the Ashington side was Ex Carlisle Players Stuart Elliot and Lance McGlen Elliot had a short spell in 2001 playing 6 games. Lance McGlen Lance was a Carlisle Youth player from 2010-2012 Lance’s only goal coming for the Youth Team in 2011 in a 5-1 win at Blackpool. He Also scored for the Reserves in a 9-0 win in the Cumberland Cup. He was Impressive when Stepping up to the 1st team for a Pre Season Friendly against Morecambe In July 2011 earning rave reviews but never went on to make it and was released at the end of the Season. He then Joined Gateshead before leaving there to go to Ashington. 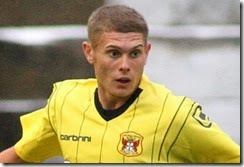 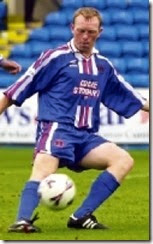 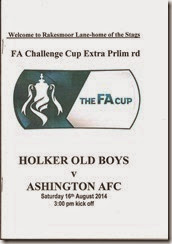 Editors note: due to the amount of stuff I have had to deal with recently in my personal life I have lost track of the number of Miles I have covered this week also I haven’t been able to concentrate on my blogging. Hopefully the tide has turned and the only way is up.