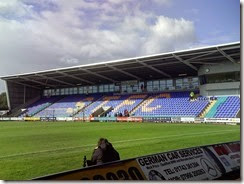 Shrewsbury Town Football Club is an English association football club based in Shrewsbury, Shropshire. The club participates in League Two, the fourth tier of English football. The club was formed in 1886 and has played in all the bottom three divisions in various guises since being elected into the Football League in 1950. Since 2007, they have been located at the New Meadow (known for sponsorship purposes as the Greenhous Meadow) – a UEFA Category four stadium with a capacity of 9,875.
Shrewsbury Town were formed on 20 May 1886 at the Turf Hotel in Claremont Hill, Shrewsbury. This was following the demise of first Shropshire Wanderers and later indirectly after Castle Blues.
Gay Meadow 1910–2007 97 years, over 3,000 matches, 3rd and 4th tier championships, 5 time Welsh Cup winners, league Cup semi finals, Football league trophy semi finals, play off semi finals, a full conference season, 10 years in the 2nd tier and huge cup shocks. This ground saw it all but was demolished in 2007 for many years, Shrewsbury coracle maker Fred Davies achieved some notability amongst football fans, by a unique service he and his coracle provided. He would sit in his coracle during Shrewsbury Town home matches, and retrieve any stray footballs that went into the River Severn. Although Davies died long ago, his legend is still associated with the club. I Visited this ground twice back in 2003 for ground number 25 my first game was a 0-0 draw in the Football League Trophy a result that saw us clinch a place at the millennium stadium for the Final against Swansea and then again 2 months later for a relegation decider Carlisle won 3-2 a result which saw the Cumbrian’s survive and Shrewsbury Relegated Brian Wake the hero scoring all 3 goals for my You Tube Highlights Click Here this has to be one of my favourite away days as a Carlisle fan.   New Meadow 2007-  Also known as the Greenhous Meadow for sponsorship purposes, is the home ground of English football club Shrewsbury Town. The stadium is situated on the southern outskirts of Shrewsbury, Shropshire, between the districts of Meole Brace and Sutton Farm, and close to the A5. It was completed in the summer of 2007 My first Visit here was on 27th Aug 2011 for Shrewsbury V Swindon I went in the Swindon end it ended 2-1 to the Shrews. This was my second Visit. I left Carlisle after a few beers in the beehive at 1300 on the CUFC Supporters bus. The coach went down the M6 towards Wolverhampton before joining the M54 and after a few traffic problems (A Diversion through Preston and roadwork's on the M54) we were in Shrewsbury by 1815 I had some scran in the Brooklands Hotel and a few ciders meeting up with Hazza my old pal from the railway who had travelled down from Carlisle on the train. We walked up to the ground in time for kick off away fans are situated behind the goal. United lost this match 1-0 which equalled the clubs longest record without a league win 14 games as we stayed rock bottom of the Football League.

We went a different way home taking the A49 up through Shropshire arriving back at 0115 going right through Warrington and onto the M6 another long day and another defeat for the blues. 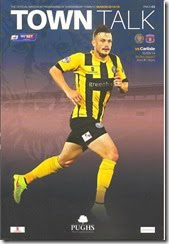 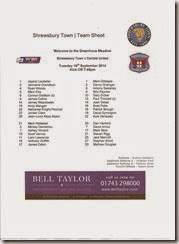 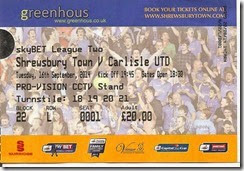