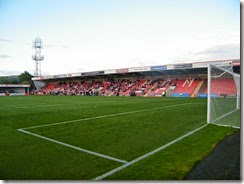 Cheltenham Town Football Club /ˈtʃɛltnəm ˈtaʊn/ is an English football club playing in League Two, the fourth tier in the English football league system. Founded in 1887, the team has played at four different grounds, namely Agg-Gardner's Recreation Ground, Carter's Field and now the Abbey Business Stadium, although it is more commonly known as Whaddon Road. Their nickname is The Robins.
Cheltenham were promoted to the FL in 1998-99 when they won the English Conference. Whaddon Road is a football stadium in Cheltenham, England. It is the home ground of Cheltenham Town F.C. and shared with Gloucester City A.F.C.. It has a total capacity of 7,066, with a mixture of seating and terracing. The ground's official name was the Victory Sports Ground until April 2009 when it was renamed the Abbey Business Stadium through a sponsorship deal.
The ground is made up of 4 stands: 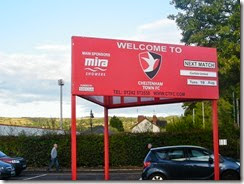 The first time I made my way down to Cheltenham was in October 2001 there were none of the all seated stands you see now there it was just open terraces and a main stand (Although obviously segregated for FL Rules). At the time I had travelled down after early shift on the 12:42 direct to Cheltenham and having arrived in Cheltenham around 18:00 I took the bus into the town centre before walking to the ground. The game ended 1-0 to Cheltenham but at the time i never took any photo’s or anything like that as Camera Phones had not yet been invented which makes me feel old as its a standard way on life nowadays. On the way back I had hitched a lift with the supporters bus paying half the return fare. arriving back in Carlisle sometime in the 2/3 Am region. I decided that this season with Carlisle being relegated It mean the opportunity to redo a few ground this was one of the ones I wanted to re do for photo’s sake.
I was picked up from home around 10am by a friend from Coventry who had been staying at his Mums near Carlisle, Once he got home and dropped his boys off back in Coventry we made the Journey from there to Cheltenham. We parked up near the Sudeley Arms and had a burger and chips inside for £7 which was massive and well worth it we wandered up to the ground from there. The game itself was 0-0 but in the last few minutes Carlisle had a goal disallowed when Billy Paynter scored but the linesman adjudged it to be offside replays have later showed he was onside. That decision probably cost United all 3 points.
After the game I managed to hitch a life back to Carlisle on the Supporters bus just like I did in 2001 for the sum of £20 sitting at the back of the bus with 3 15 Year olds from Workington who had to wait for the 07:40 train back out west when we eventually arrived at 2.15am. A long day but glad I got some photo’s

Miles from Carlisle 274 Via Coventry