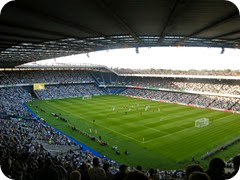 Celtic Football Club (/ˈsɛltɪk/) is a football club in Glasgow, Scotland which plays in the Scottish Premiership. Since playing its first game in 1888, Celtic has never been relegated. Celtic have a long-standing rivalry with Rangers; the two clubs are collectively known as the Old Firm. Celtic have won the Scottish League Championship on 45 occasions, only bested by Rangers, most recently in the 2013–14 season, the Scottish Cup 36 times and the Scottish League Cup 14 times. In 1967, Celtic won an unprecedented quintuple: not only becoming the first British team to win the European Cup but also winning the Scottish League Championship, the Scottish Cup, the Scottish League Cup, and the Glasgow Cup. Celtic also reached the 1970 European Cup Final, and the 2003 UEFA Cup Final.
Celtic Football Club was formally constituted at a meeting in St. Mary's church hall in East Rose Street (now Forbes Street), Calton, Glasgow, by Irish Marist Brother Walfrid on 6 November 1887, with the purpose of alleviating poverty in the East End of Glasgow by raising money for the charity Walfrid had instituted, the Poor Children's Dinner Table. Walfrid's move to establish the club as a means of fund-raising was largely inspired by the example of Hibernian who were formed out of the immigrant Irish population a few years earlier in Edinburgh. Walfrid's own suggestion of the name 'Celtic' (pronounced Seltik), was intended to reflect the club's Irish and Scottish roots, and was adopted at the same meeting. The club has the official nickname, "The Bhoys". However, according to the Celtic press office, the newly established club was known to many as "the bold boys". A postcard from the early 20th century that pictured the team, and read "The Bould Bhoys", is the first known example of the unique spelling. The extra h imitates the spelling system of Gaelic, where the letter b is often accompanied by the letter h.
On 28 May 1888, Celtic played their first official match against Rangers and won 5–2 in what was described as a "friendly encounter". Neil McCallum scored Celtic's first ever goal. The squad that played that day was largely composed of players signed from Hibernian. Celtic's first kit consisted of a white shirt with a green collar, black shorts, and emerald green socks. The original club crest was a simple green cross on a red oval background.
Celtic's stadium is Celtic Park, which is in the Parkhead area of Glasgow. Celtic Park, an all-seater stadium with a capacity of 60,832, is the largest football stadium in Scotland and the seventh-largest stadium in the United Kingdom, after Murrayfield, Old Trafford, Twickenham, Wembley, the London 2012 Olympic Stadium and the Millennium Stadium. It is commonly known as Parkhead or Paradise. Due to the Commonwealth games opening Ceremony this game was to be played at Murrayfield 40 miles down the road in Edinburgh after all 3 of Glasgow's Major stadiums being used for the Commonwealth games (Ibrox, Celtic Park and Hampden). 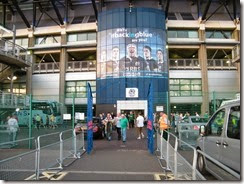 Murrayfield Stadium (known as BT Murrayfield Stadium for sponsorship reasons, or usually just known as Murrayfield) is a sports stadium located in the west end of Edinburgh, the capital of Scotland. Its all-seater capacity was recently reduced from 67,800 to 67,144 to incorporate the largest permanent "big screens" in the country, though it remains the largest stadium in Scotland and the 4th largest in the United Kingdom. The stadium is the home of the Scottish Rugby Union (SRU), and is primarily used as a venue for rugby union and hosts most of Scotland's home test matches, as well as the Edinburgh Sevens, the Scottish Hydro Electric Cup final, as well as Pro12 and Heineken Cup matches. Although mainly a rugby union stadium, Murrayfield has in the past hosted American football, rugby league and association football matches and music concerts. One of the most notable of the latter was the Edinburgh 50,000 - The Final Push concert as part of Live 8. The SRU bought some land and built the first Murrayfield, which was opened on 21 March 1925. Previous internationals had been played at Inverleith. The first visitors were England, whom Scotland beat to win their first Five Nations Championship Grand Slam. In 1994, Murrayfield completed a 50 million pound renovation where floodlights were installed for the first time. Murrayfield has also hosted football matches. Local Scottish Premier League side Heart of Midlothian F.C. (Hearts) started using Murrayfield as their home venue for their European campaign in the 2004–05 & 2006-07 seasons as Tynecastle did not meet the UEFA criteria. Competitive matches against Sporting Braga (18,203), Ferencvaros(26,182), Schalke(27,272), AEK Athens (32,459), Siroki Brijeg (28,486)  and Sparta Prague (27,255) have been played at Murrayfield. This practice has since stopped, however, as Hearts made adjustments to ensure that Tynecastle complies with UEFA regulations. Additionally, both Hearts and Hibernian have played preseason friendlies against FC Barcelona (57,857) & (23,390) at Murrayfield. Almost 58,000 people attended to watch Hearts play FC Barcelona, recording the largest crowd at a football match in Edinburgh for 51 years.
Murrayfield was a candidate to replace Hampden as the national football arena for the early parts of Scotland's UEFA Euro 2016 Qualification Campaign due to Hampden's renovation for the Commonwealth Games. However, it was decided that one of the two stadiums in Glasgow would be used

We set off from Carlisle at around 5pm making the 100 mile Journey up the M74 and A702 arriving in Edinburgh around 1850 with a bit of traffic caused by some roadwork's on the approach to Edinburgh itself. we were parked up on a side street called Baird Drive at the end of Baird drive is some metal gates which are locked but if your follow the narrow path round to your left you come into the stadium via the car park (See below) making sure you cross the water of Leith. The picture above is taken from the gates at the end of Baird Drive. The new tram stop is right outside you can use the trams which is priced at £1.50 each way 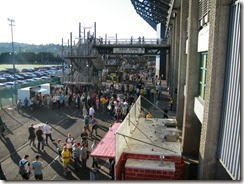 Once inside we took our seats for the game which Celtic won comfortably 4-0 which could have been more Dutch defender Van Dijk helped himself to an early double before Pukki repaid manager Ronny Deila's faith with a third before half-time.The impressive Pukki completed his own double late in the second half. At half time we were able to move seats freely to get a better view we decided to sit closer to the half way line still on the second tier but due to the open style of the stadium you could have sat anywhere
After the game we made our way back to the car and headed back to Cumbria arriving back around half 11 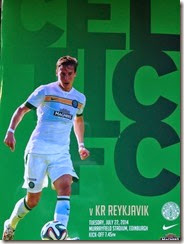 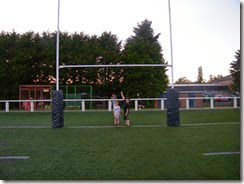