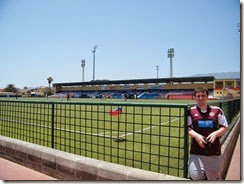 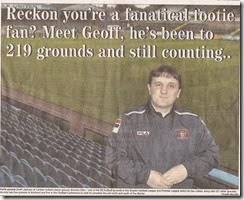 To be honest there hasn’t been many this season been a poor season all round not just for Carlisle but for Hearts as well although I have beaten my personal best for games in a season it has come at a cost to my family life but I won’t go into on here as the damage may have already been done. I must admit sometimes when your life is going wrong elsewhere you tend to go to football to get a release from the bad heads and stresses, which to a degree worked for me but towards the end of the season I started to take the stress and worries into the games with me the season had been such a poor season for my clubs. Instead of watching the games and enjoying them I was worrying throughout the games, I didn’t help when Carlisle were playing so poorly with very few highlights. The games and holiday in Spain were supposed to be the highlight of my season and supposed to let me chill after a long season but I spent most of the holiday worrying about what was going to happen when I got home.

During the close season I have to take a long look at my life with football. I have always centred things around football and football was always my release from the stress of the day life but with my kids now 6 and 10 they must always take priority. Although I have always been football mad its only since 2009 that I have been doing neutral grounds. It does take over your life hopping became an addiction to me the consent checking of the fixture list all week sometimes taking off in the Car with the Kids packed in the back knowing that I have to juggle their attention and well being along with watching the game. I must give the kids credit they have put up with twice now 3 games in a day, double headers and long weekends away. To an extent they enjoy the Northern League where they can run around take a ball and kick it around on open area’s to their hearts content. Grounds like Marske, Whitehaven and Washington have goals and nets around the pitches to keep them entertained, Others just have open grassed area’s where the usual jumpers for goal posts comes into play

So for next season I get a fresh start as a single man and Carlisle are in League 2 which gives me the opportunity to visit Cambridge and Luton and 7 other grounds that I have not seen Carlisle Play at, I aim next season to spend more time at weekends with the kids although throughout this season they have accompanied me to most games (Daniel reaching the marker of 100 grounds in April). I’ll try to stay local and try to get to more Carlisle games is a priority for me next season as well as doing things with the kids more on weekend rather than football hopefully I can cure the Addiction or at least get control of it. Also my love of all things Carlisle United has wandered a little this season but with relegation comes a complete set of new grounds which may re-ignite my love for the club and maybe I can start to enjoy Carlisle away games again.

Obviously I won’t get to all of these but this is the to-do list that I aim for although as started above I need to calm my hopping down. Visits to Cambridge and Luton top of the list

Hope everyone enjoys the Summer