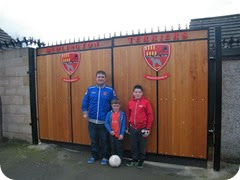 Bedlington Terriers F.C. are a football club based in Bedlington, England.They were formed in 1949 as Bedlington Mechanics and started off life in the Northern Combination League but later joined the Northern League in 1983. they disbanded in 1963 but reformed in 1965 and re-joined the Northern Alliance League. In the 1966–67 season, the team won two trophies when they became the Northern Alliance league champions and cup winners, but dropped out of the league in 1971. The club went on to play in local amateur leagues for almost ten years before becoming members of the Northern Alliance League once again in 1980 (this time as Bedlington United).In 1982, the club became one of the founding members of the Northern League Division Two. Promotion to Division One was achieved in 1985, but the club remained there for just two seasons before being relegated in 1987. By 1993, the club was at the bottom of Division Two and in serious danger of going out of business, but was saved by the financial support of local businessmen Dave and Keith Perry. The club was also renamed as Bedlington Terriers. With the club now financially stable, instant success followed on the pitch, and the club became champions of Division Two in their first season under their new name. The club had a memorable season in 1998–99, defeating Colchester United 4–1 in the FA Cup before losing in the second round to Scunthorpe United. This remains the only season in their history where Bedlington have progressed beyond the qualifying rounds of the FA Cup. In the same season, the Terriers also became league champions after amassing a total of 101 points, and reached the final of the FA Vase, where they lost 1–0 to Tiverton Town.

On 4 November 2010, it was announced that American billionaire Robert Rich, owner of the Buffalo Bisons and Jamestown Jammers baseball teams, had become the new shirt sponsor of the club with his Rich Products brand. Rich, the 488th richest man in the world, became involved after tracing his family tree back to the area and after his wife Mindy purchased the title of Lord Bedlington for him as a gift. Mr. Rich has since announced the shipment of a £30,000 electronic scoreboard to the club's Welfare Park ground, and will be looking to turn the club shirts into a cult item for US sports fans.In June 2011, the team played friendlies in Buffalo, New York and Niagara Falls, Ontario.The trip and match were filmed and later made into a BBC documentary called Mr Rich and The Terriers The friendly between FC Buffalo and the Terriers was known as the "Lord Bedlington Cup," named after Rich. I was unable to find out if he still sponser’s the club but it does seam as though the agreement has stopped 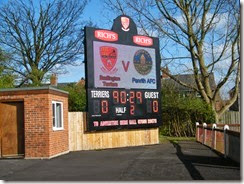 The ground itself has 2 open sides with the Changing rooms and clubhouse behind the goal and on the side is the tea hut and a small main stand. Honours include the Northern League Division 1 title for 5 consecutive seasons from 1997/98 to 2001/02 and the Division 2 title in 1993/94 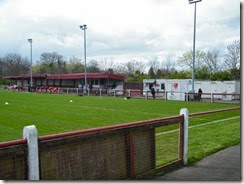 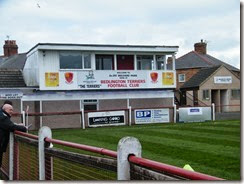 We set off from Cumbria Around 12 stopping off at the Red Lion Wetherspoon’s for Lunch before making our way to the ground for 1430 I had 3 accomplices my 2 Sons Daniel and Andrew as well as Penrith’s Reporter from the Cumberland and Westmorland Herald Craig McGlasson They match itself was a dull affair with Penrith Striker Coleman missing a guilt edge chance in the 2nd minute when he broke through one on one with the keeper, he managed to round the keeper but failed to get enough power on the shot and the keeper was able to stop it on the line. after that Penrith had few chances apart from after 30 Min’s when Coleman had a shot which was well saved from the resulting corner the Bedlington keeper dropped the ball but was able to pick up the ball before Penrith could tap home. Loughborough had a header cleared off the line for Bedlington and Penrith had a scramble in the box from a header. 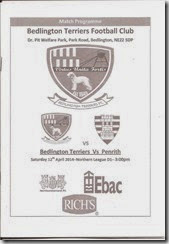 Miles from Carlisle 67 Each Way