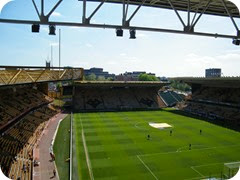 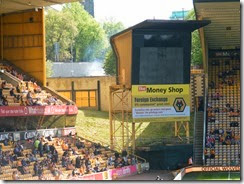 In the summer of 1889 the club moved to its permanent home ever since, Molineux, in the Whitmore Reans area of the city. The stadium name originates from the Molineux House built in the area by Benjamin Molineux, a local merchant, in the 18th century and whose grounds were later developed to include numerous public leisure facilities. When the Northampton Brewery Company purchased these grounds in 1889, they rented their use to the city's football club, who were seeking to find a home more befitting a Football League member. After renovating the site, the first ever official game was staged on 7 September 1889 before a crowd of 4,000. Wolves bought the freehold in 1923 and soon began a series of ground improvements, beginning with the construction of a major grandstand on the Waterloo Road side. In 1932, the club also built a new stand on the Molineux Street side and followed this by adding a roof to the South Bank two years later; this South Bank was historically the second largest of all Kop ends in the country and regularly held crowds in excess of 30,000. The stadium finally now had four complete stands that would form its basis for the next half century. In the days before seating regulations, the ground could hold more than 60,000 spectators, with the record attendance being 61,315 for a First Division match against Liverpool on 11 February 1939. When the Molineux Street Stand failed to meet new safety legislation, the club began building a new replacement stand behind the existing one, on land where housing had been demolished. This new all-seater stand – named the John Ireland Stand after the then-club president – was completed in 1979, as the planned first stage of a rebuilding of the entire stadium. The £2 million cost of this stand though made the club's financial situation critical and it entered receivership in 1982. By the time the team dropped into the Fourth Division in 1986, only the John Ireland Stand and the South Bank terrace remained in use after new safety laws implemented following the Bradford City stadium fire forced the closure of both the now-dilapidated North Bank and Waterloo Road Stand, which the club lacked the finance to improve. Following the takeover of the club by Sir Jack Hayward in 1990, £8.5 million of funding was made available to comprehensively redevelop Molineux. Between August 1991 and December 1993 three sides of the stadium were completely rebuilt to form a 28,525 capacity all-seater stadium that complied with the Taylor Report: the Waterloo Road Stand was replaced by the Billy Wright Stand, the North Bank terrace by the Stan Cullis Stand, and the South Bank terrace by the Jack Harris Stand.[8] Aside from the addition of a temporary seating area in the southwest corner used during Wolves' seasons in the Premier League, this redevelopment formed the stadium for almost twenty years. In 2010 plans were unveiled of an extensive redevelopment programme to enlarge the capacity and develop the facilities.The first stage of this saw a new two-tier Stan Cullis Stand become fully operational for the 2012–13 season, raising the current official capacity to 30,852. The second stage would see the rebuilding of the oldest stand at the stadium (retitled the Steve Bull Stand in 2003) to increase capacity to around 36,000 but this has been indefinitely postponed.
My first visit to Wolves was when they were a Premier League side they had a FA CUP game against Stoke on the 30th January 2011 Ground number 118 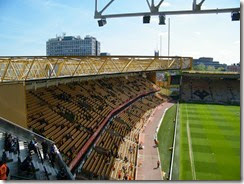 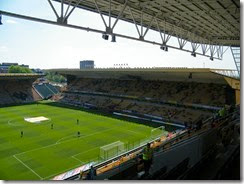 We left Carlisle at 1000 straight down the M6 to Junction 13 then following the road straight into Wolverhampton you will come across the stadium as you enter the City. We parked up at the civic centre before heading to KFC for dinner. We made the short walk to the ground for 1430 entering the turnstiles then climbing up into the Top tier. After a while we decided to switch to the Lower tier where he height wasn’t as bad.
This was Carlisle’s do or die game to be fair the game itself didn’t really matter in order for Carlisle to stay up they had to Win then Tranmere and Crewe would have to lose with a 3 goal swing against Crewe Unlikely it seamed. Before the game I expected Tranmere to Beat Bradford but I couldn’t see Crewe beating Preston, In the end I got them both wrong as Crewe beat Preston and Tranmere Lost to Bradford. I also assumed Carlisle would beat Wolves. I was wrong after only 5 Minutes Wolves skipper Sam Ricketts was alone to cut inside to let fly into the bottom corner a rather soft goal to concede. On 24 Minutes Michael Jacobs doubled Wolves' lead after heading Scott Golbourne's cross in off the post again a rather easy goal to give away. In truth Wolves never got out of second gear and easily beat Carlisle who were devoid of any Confidence and form and had probably accepted there fate. Nouha Dicko then made it 3-0 when he rattled a strike into the roof of the net, after some good build up down the left and a good save from Pickford, Dicko had the Simple task of ramming the ball home. 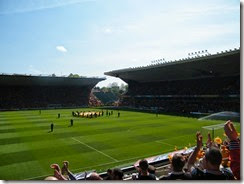 After the game we were quickly able to get out the stadium and head home as the Wolves Fans stayed behind to celebrate the League One title. On the way home myself and fellow ground hopper Adam were able to contemplate the poor season we had injured and a season where everything that could go wrong did go wrong the only thing that did go for us was the Fa Cup 3rd draw which paired us with local Rivals Sunderland (Well localish as you expect being a Carlisle Fan) even then the reduced ticket prices and their FA cup Semi final against Man United meant that the money raised wasn’t as big as it should have been perhaps.
So for next season in League 2 I have Luton to Visit and possibly Cambridge if they come up as well as AFC Wimbledon, Burton Portsmouth, Dagenham and Newport who I have not seen Carlisle play at, as well and Stevenage and Shrewsbury who joined us from League 1 so out of the Current 92 I have seen Carlisle play at 55 this will be reduced to 53 once Bristol Rovers and Torquay go down as Both Luton or Cambridge/Gateshead I have not seen Carlisle at. And my 92 will be down to 90 if Cambridge come up or 91 if its Gateshead.
Sadly Wolves is a great ground and it will be a while before I visit again as Wolves go onwards and upwards while Carlisle drop down to the lowest tier of the English Professional game. what will next season bring well who knows with 10+ players out of contract this summer will be interesting 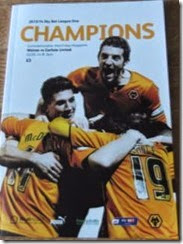