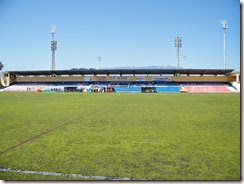 The Telde Union Deportiva is a football club from the city of Telde , Island ( Las Palmas ) Spain . Currently playing in the Division III category, after ascending administratively in 2010/2011 season. The UD Telde is the fourth team in qualifying Group XII Historic Third Division

La Unión Deportiva Telde born in 1965 as a result of the merger of several teams in the municipality. In 1980/81 season is one of the twenty teams that founded the Grupo Canario Third Division, of which he was champion in its second season. Another achievement of the clubs is shared with Las Palmas At. CD Maspalomas and being the first teams that reached Segunda Division B Group Canario from the Third Division, was in the year 1987 after finishing third in the league championship they stayed there for 4 seasons. On there return to the Third Division they tried for several years to return to Segunda B without success. In 2004-05 they were relegated before regaining promotion in 2010-11. The team plays its home games at the Estadio Municipal Pablo Hernández Morales, with capacity for 3,500 spectators. 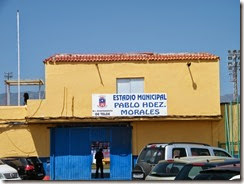 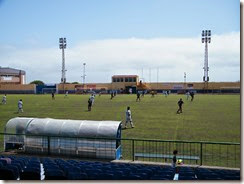 Leaving the Hotel in Las Palmas I made my way down the Gran Canaria Motorway GC1 I came off at the Junction with the GC-10 and Drove about a mile down the road before I passed the Stadium on my right. To get to the ground I had to drive down to the round about then do a U turn am come back down the other side of the carriage way come off at the Camino del Hornillo turn off then crossing the bridge over the dual Carriage way down towards the car park tucked in behind the stadium

The game itself was open and Frantic a fine display of goalkeeping from both keepers kept the scores 0-0 at Half time then on 56 Min’s Jorge headed the ball into an empty net. A free kick was taken on the left after a bit of a scramble a shot was parried by the goalkeeper but the shot spun up into the air and Jorge was able to head into an empty net. On 85 Min’s Eric Equalized when his shot took a few deflections and ended up in the net. In the 92 Minutue Claude and Josito were dismissed for a clash of heads Jostio making the most of the head butt to try to avoid a red card

You can view highlights Here 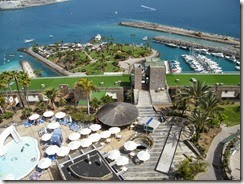 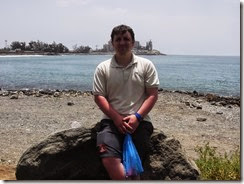 After the game I headed down towards Anfi De Mar to continue the rest of my family holiday I wasn’t able to pick up any more games that week but came close to Club de Futbol Mogan and CD Arguineguín which is the town where Manchester City and Spain forward David Silva was born.