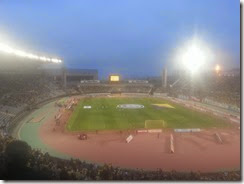 Unión Deportiva Las Palmas, S.A.D. is a Spanish football team based in Las Palmas de Gran Canaria, in the autonomous community of Canary Islands. Founded on 22 August 1949 it plays in Segunda División, holding home games at the Estadio de Gran Canaria, with a capacity of 31,250 seats. The club remains the only one in Spanish football to achieve back-to-back promotions to La Liga in its first two seasons. It had a 19-year run in the competition, ending in 1982–83. Even though the club registered with the Royal Spanish Football Federation on 6 June 1949, UD Las Palmas was officially founded on 22 August of that year, as the result of a merger between all five clubs on the island: Club Deportivo Gran Canaria, Atlético Club de Fútbol, Real Club Victoria, Arenas Club and Marino Fútbol Club. The union was to create a club strong enough to keep Canarian players on the island and not to seek a better career on the mainland. Honours include the Segunda Division in 1953-54,1963-64,1984-85,1999-2000, They have been in Europe on 3 Occasions, The 1969-70 Season saw them compete in the Inter-Cities Fairs Cup knocked out in the 1st round by Hertha BSC in 1972-73 they Qualified for the UEFA Cup losing to FC Twente in the 3rd Round after beating Torino FC and SK Slovan Bratislava. The 3rd time was in 1977-78 when they lost to Eventual Champions Ipswich in the Second Round. also that season they lost the Copa del rey final to Barcelona. They have been in the Segunda Division for 8 Seasons after being promoted from the Segunda B in 2005-06 they had previously been in La Liga in 2000-01 and 2001-02 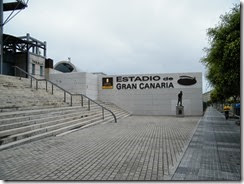 When my Partner and I decide on a holiday they always usually end up being centred around a football match. This season after deciding on Gran Canaria as our destination a study of the Fixture list decided that Las Palmas was going to be my desired fixture. After my partner booked the 2 weeks in her Aunties time share and her flights in became clear that I was going to be unable to get 2 weeks off work. So I made the decision to go for the 1st week and fly out alone, this was because the match KO time had not yet been decided slightly frustrating but that's the way the Spanish do it. So I booked the Early morning flight from Edinburgh for around £55 0620 Arriving at 1115 thus being in Gran Canaria for any eventual KO Time, Then low and behold the match had been scheduled for 9pm on the Saturday Night which meant a long wait for KO.
My Journey began on the Friday night Leaving Carlisle on the 2210 to Edinburgh Haymarket (ticket has been booked in advance for £8)  the newly refurbished Edinburgh Haymarket The station was listed amongst the most congested on the Scottish railway network due to rapid increases in passenger numbers. Network Rail has recently completed a £24M upgrade following the 2007 business plan, which suggested that options for remodelling passenger facilities at the station were to be considered during the period of the plan.

Upon exiting the station I found myself at the Bus stop waiting for the 100 Night bus to Edinburgh Airport Priced at £4 (The trams do start on the 31st May 2014) The Journey didn’t take long and I was at the Airport Shortly after Midnight. I had a 6 Hour wait at the Airport taking a seat in the Costa Cafe which is open 24 Hours. I then had breakfast at The Wetherspoons named the Turnhouse Bar which is open from 5am. 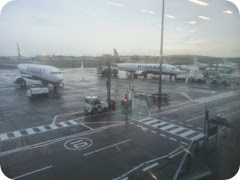 The busy flight took off from Edinburgh around 0635 and we landed safely at Gran Canaria Just after 11 I then Collected the Hire car (Which cost £66 for the Week) and headed to Las Palmas. This was my 1st driving experience abroad and after the initial panic at the 1st round about I eventually found my way up to Las Palmas where i collected some Fuel priced at 21 Euros that lasted me the full week. I then made my way up to the Stadium buying a ticket for 22 Euros and having a quick look in the Club Shop 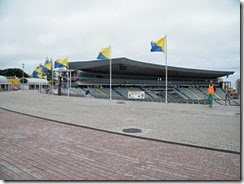 After that I headed to a hotel I had booked in the Town Centre close to the beach. I did this because the thought of driving from Las Palmas to Anfi del Mar, located just outside of Arguineguín. at midnight didn’t sound a good idea to me. So I Stayed in the Hotel Puyol for 35 Euro’s around £29. Around 6pm I decided to make my way towards the ground I headed for the town centre and then found myself standing at a bus stop waiting for the 44 bus to the stadium many Las Palmas cars went past bipping horns and waving flags as the atmosphere boiled. Arriving up at the ground for 8pm (yes I got lost a little and ended up waiting 30 Min's for a bus) I headed to the numerous bars looking for a couple of Dumbarton Lads I had meant on the plane, but it was no avail the bars were rammed solid the streets were full of rubbish and discarded beers (Id hate to be cleaning up that mess). I entered the stadium around 2045 and was able to grab a quick beer before KO (Not sure if it was alcoholic). The atmosphere was amazing both sets of fans made so much noise. When the winning goal went in with minutes to spare the ground erupted, it was like they had won the cup 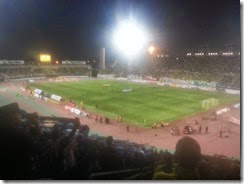 The Canary Islands derby is the name given to football matches contesting Spanish sides UD Las Palmas and C.D. Tenerife, who are generally regarded as the top two sides in the Canary Islands.The Canary Islands derby is a match with a lot of rivalry and intensity that has always faced the islands of Gran Canaria and Tenerife and its inhabitants.According to World Soccer Magazine,The Canary Islands derby is on the list of the 50 greatest rivalries in the world,is considered one of the most important and spectacular derbies in Spain. Las Palmas have generally been more successful in derby matches.
You can view highlights here
You can get an idea of the Atmosphere here
After the game I decided to walk back to the Hotel it took me over an hour for the 6.3 Km’s and I had a nice walk along the sea front at the end of it having a beer in a bar near the hotel shortly after midnight before retiring to bed ready for the second game the next day in Telde.