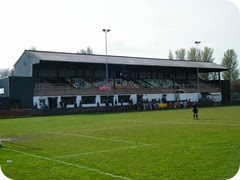 A.F.C. Liverpool is a semi-professional English football club set up by 1,000 Liverpool Football Club fans in 2008. Fans are able to buy into the club on a 'one member-one vote' basis. The club kicked off the 2010–11 season in North West Counties LeagueDivision One. In the 2013–14 season they will play in the North West Counties Football League Premier Division. The first game in the club's history was a friendly played on 16 July 2008 against St Helens Town. The result was a 1–1 draw with the first ever goal for AFC Liverpool being a penalty scored by Martin Crowder.Prescot Cables granted AFC Liverpool permission to play their home games at Valerie Park up till 2014. The club has announced that, with effect from season 2014–15, home matches will be played at the Arriva Stadium, home of Marine F.C. 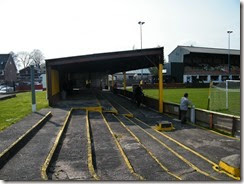 Valerie Park, traditionally known as Hope Street, is a stadium in Prescot, Merseyside. It is located on Eaton Street in the Metropolitan Borough of Knowsley. It is home to Prescot Cables of the Northern Premier League and, since their formation in 2008, A.F.C. Liverpool of the North West Counties Football League, Athough Afc Liverpool are due to leave in 2014. The record attendance is 8,122.The ground has a stand with a function room and seating above it. It has also a terraced stand and 2 sides are not built on. 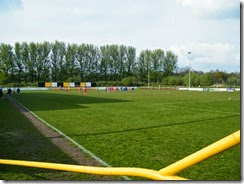 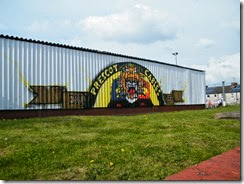 I had originally planned for a visit to Wakefield but the Bank Holiday traffic was bad on the A66 so I Decided to continue down the M6 I then aimed for Whitton Albion but again the traffic slowed me down I decided to aim for Prescot and AFC Liverpool just making it for 15:00 Two goals from Ryan Cox and one from Jack Sinnott ensured AFC Liverpool took the bragging rights in the mini Merseyside derby to sign off from Valerie Park in style. It was a fairly comfortable win for the Reds, who were barely troubled by their visitors in the first period and though Bootle stepped up their game after the break, AFC Liverpool’s stand in keeper, manager Paul Moore, was only forced into two saves. This was AFC Liverpool’s last game at Valerie Park before they switch to Marine’s Arriva Stadium. 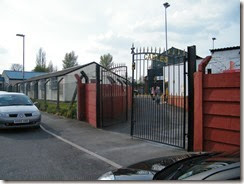 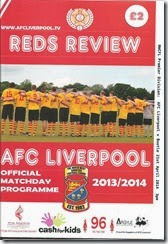