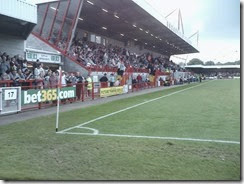 Crawley Town Football Club is an association football club founded in 1896, and based in Crawley, West Sussex, England. Crawley play in Football League One, the third tier in the English football league system. The club's home ground is at Broadfield Stadium. First promoted to the Football Conference in 2004, the club survived a financial crisis to win promotion to the Football League in the 2010–11 season. In the same year they reached the 5th round of the FA Cup, where they lost to Manchester United. Formed in 1896, Crawley Town became founding members of the West Sussex Football League that year, joining the Junior Division.They remained in the West Sussex league for five years before transferring to the Mid-Sussex League, winning the League in only their second season. In 2010 Bruce Winfield announced that he and Susan Carter had become majority shareholders and had attracted new investment for the club, some of which came from overseas. The investment allowed manager Steve Evans to start rebuilding the squad, which saw 23 players signed over a six-month period including Matt Tubbs, for £70,000 Sergio Torres for a record £100,000,and Richard Brodie for an undisclosed fee, the fee paid is estimated at a new Conference record of £275,000. 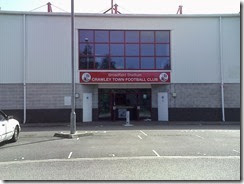 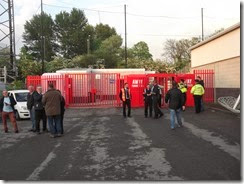 Crawley Town FC spent 48 years at their Town Mead home until the land was sold to developers in 1997. The club then moved to the Broadfield Stadium, about two miles across town. The stadium has a capacity of 5,996 people, and is owned by Crawley Borough Council. The record attendance reached 5,880 on Saturday 5 January 2013 when Crawley Town hosted Reading in FA Cup. In August 2013 it was announced that the club had agreed a sponsorship deal with the online trades comparison company Checkatrade to rename the stadium as The Checkatrade.com Stadium 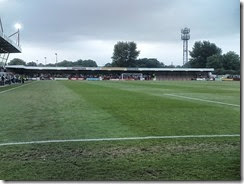 Setting off from Carlisle me Danny and Harold made the Journey tto the Capital Starting with the 1249 to London Euston we arrived in London just after 1620. We then made our way to London Victoria where we met up with another few CUFC fans and had a meal in the Wetherspoons above the platforms. We then made our way on the train to Crawley we had a couple of pints in the White Hart pub in Crawley before grabbing a taxi to the ground. At the ground I grabbed a programme which was £3 but was a 12 page wrap around of the original programme that was PP.
The game was a dull 0-0 draw in a game in which Carlisle had to Win after being beaten by Oldham at home on the Saturday previous. Crawley’s Jamie proctor had the best chance but his one on one shot was saved well by Pickford. Liam Noble hit the bar shortly after that but Carlisle were unable to find a way through the Crawley defence. 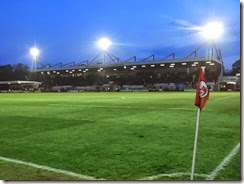 As soon as the final whistle went we walked to the Station before catching the slightly late 2201 to Victoria. Upon arrival at Victoria the tube station was closed and the underground was off due to the industrial action. So we had to grab a taxi to Euston Luckily there was 5 of us so it wasn’t too bad. We boarded the 2350 Sleeper service to Carlisle me and Danny had booked the seating coach but Harold being a rail worker he had booked a bed for roughly the same price as us, arriving in Carlisle at 0520 we then headed home contemplating league 2 football next season. 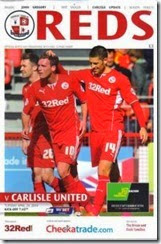