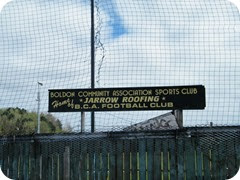 Jarrow Roofing Boldon Community Association F.C. is a football club based in Boldon Colliery, near Sunderland, England. They were established in 1987. Roofing as they are nicknamed joined the South Tyne Senior League in 1987-88 they joined the Wearside league in 1991-92. at the end of the 1995-96 Season they Finished runners up to Marske but were promoted after Marske,s ground was not up to standard and joined the Northern League Division 2 after just one season they were promoted to Div 1 as runners up they remained in Div 1 until 2007-08 when they went back down and in 2009-10 they went back up but were again relegated in 2011-12 and have been there ever since finishing 4th in 2012-13. The ground itself is a small shack of a ground very close knit with not much room. it has a small stand on both sides and a standing hut behind one end with the other end open. 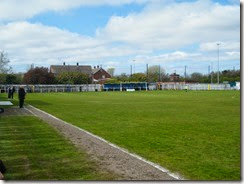 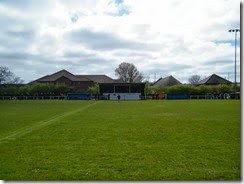 This was the 1st game of the Easter Saturday Ground hop so KO off was at 11am we managed to get away from Carlisle at around 0930 after I had finished work I was joined by my 2 sons and their friend as well as fellow cumbrian ground hopper Adam Sheridan. The post code given out by the Northern League actually took us to Boldon Comprehensive School so we had to turn around and go back up to the Roundabout before we actually found it on Google maps, arriving just after KO. There wasn’t much in the game but the opening chance of the game came to Roofing’s Young when he saw his shot saved by Heaton keeper Backhouse.  Roofing took the lead after 13 minutes when Gardiner slipped the ball into Andy Appleby’s path who slotted home from 12 yards. both sides had chance after that but at half time it was still 1-0 In the first minute of the second half Shaun Heads threw a ball into the penalty area which was headed on to Paul Gardiner who hit a half volley from the edge of the box and it was saved. Stephen Young played some nice football after 62 minutes, he went round the defender and fired a shot from a tight angle which was saved by Backhouse. Heaton should have equalized after 72 minutes when a very dangerous low ball was put across the penalty area and it only needed the slightest of touches to be guided into the net. Appleby once again had the ball in the net just before the end but this was ruled out for off side 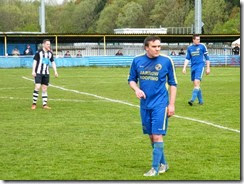 Gardiner was at Carlisle for 3 years making the Bench in 2004 against Yeovil and was about to come on for the final few seconds only for the ref to blow for full time later released at the end of the 2005-06 season (although he had been told at Christmas) he then had a loan spell at Gateshead. After leaving Carlisle he then went on to Ponteland United, Ashington, Walker Central, West Allotment Celtic, Hebburn Town before landing at Jarrow he looked a decent midfielder and had a good game

Here’s how described his time at Carlisle In a recent interview given to Jarrow Roofing website. The full article is available below

“I was playing for Walker Central in a cup final on the last day of the season when I was 15-years-old and I played pretty well. Unknown to us, a scout from Carlisle United was watching the game and a few days later he rang the house asking my mam if I would like to sign for them; I’ve never seen her run so quick as she did to tell me to take the phone from her.

“I can remember the first day with Carlisle as if it was yesterday and it was an experience I will never forget. My youth team manager was Billy Barr. He set all of our jobs. I was in charge of the kitchen for one day which also involved washing and drying the training kit. I lasted one day and was demoted to sweeping the boot room.

“After all this was he then sent the lads over with all the gear for the first teamers. As I was a first year and inexperienced I got stuck with carrying the goals over to the training ground while the second years carried balls, cones and bibs.

“We finally made it to our training session and immediately my manager said ‘OK, 12 minutes starts now’ and we had to run round a track for 12 minutes non-stop followed my press-ups and sits-ups then repeat it all. I lay on the floor after 5 minutes, gasping for air and throwing up. That night I rang my dad telling him I was ready to quit as I could not move any part of my body; I was in agony.”

“I was named as substitute for a home match against Yeovil in the Football League when I was 16. To look up and see my mam and dad looking down so proud of me was a great moment. I had been told to get stripped to get on with a few minutes remaining as we were winning 2-0 but then the ref blew the final whistle – it was a pity I didn’t get on.”

“After two and a half fantastic years at the club I was brought into the office with Paul Simpson and Billy Barr and was told I was not in their first team plans and they were releasing me. I understood, but was just a little annoyed with the timing being two days before Christmas. But everything happens for a reason.” 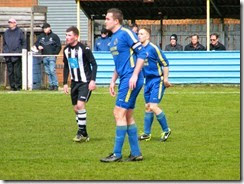 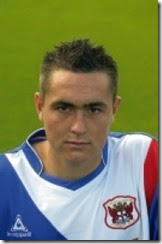 Kirkup was Offered a 2 year Pro deal in 2006 after 2 years as a YTS during which he made 1 playing appearance against Morecambe in the Conference Cup at Christie Park while Carlisle were in the conference, he stayed a further 2 years making the bench a few times. In 2006-07 Season he was sent on Loan to Southport and Clyde and was set to star in the 2007-08 season under Neil McDonald but McDonald was sacked after just 1 game, he later joined Workington on Loan and at the end of the season the deal became permanent. He later went to New Zealand for a bit playing for Hawkes Bay United and Sunshine coast in Australia. When returning to England he has had spells in the Northern League with Morpeth, Jarrow, South Shield and Hebburn before returning to Jarrow again. Kirkup also had a good game at the back Kirkup is a no nonsense defender and he is the club Captain

Here’s how described his time at Carlisle In a recent interview given to Jarrow Roofing website. The full article is available below

“Carlisle United was a great experience but also a case of what could have been. I had two great years as a youth player, picking up the club’s Young Player of the Season award, and I was a regular in the reserves”

“I made my first team debut at the age of 16. Paul Simpson had me travelling with the first team on a regular basis at a young age and I signed a two-year professional contract when Neil McDonald was manager.

“He was looking to get me first team experience on loan for a season to then get me into the first team at Carlisle. I had two loan spells: one at Southport in the Conference and then at Clyde in the Scottish First Division. I went out there and done pretty well. Working under a person like Colin Hendry at Clyde was excellent as he is possibly the best centre half the Premiership has ever seen, so he helped me massively.

“Then Neil McDonald got sacked two games into the season. We played Walsall away and I was an unused sub. On the bus journey home he sat next to me, bigging me up with confidence and telling me to look after myself over the weekend because he was playing me on the Tuesday night at Bury. He got the sack on the Monday morning. It all went downhill from then. I always think to myself ‘if he didn’t get sack where could I be playing now?’ because he was a man who rated me and wanted big things from me.” 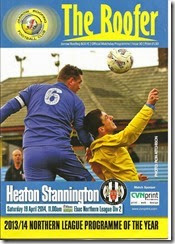 Many thanks to Andy Hudson at Jarrow Roofing for allowing my to use his interviews. I’d also like to add how professional the programme is and its something you’d expect from a League team but not from a Non League side you can follow him on twitter here HuddoHudson