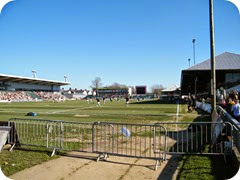 Newport County Association Football Club is a professional association football club based in the city of Newport, South Wales. The club participates in Football League Two, the fourth tier of the English football league system. Most recently reformed in 1989, the club is a continuation of the Newport County club which was founded in 1912 and was a founder member of the Football League's new Third Division in 1920. Newport County were Welsh Cup winners in 1980 and subsequently reached the quarter-finals of the UEFA Cup Winner's Cup in 1981. The club was relegated from the Football League in 1988 and went out of business in February 1989. The club reformed shortly afterwards and entered the English football league system at a much lower level. The club achieved promotion to the Conference Premier for the 2010–11 season, the same level they played at prior to the original club's bankruptcy in 1989. In 2013, Newport beat Wrexham FC in the Football League play-off final 2–0 to return to the Football League for the first time since 1988. Newport County,originally nicknamed "The Ironsides" due to Newport being home to Lysaght's Orb Works steel works In May 2012, Newport County announced that they had agreed a deal to move to the city's rugby stadium, Rodney Parade. In August 2012 EuroMillions lottery winner Les Scadding succeeded Chris Blight as club Chairman. In February 2013 a further 10-year lease to play at Rodney Parade was signed.

Rodney Parade is a stadium in the city of Newport, South Wales. It is operated by Rodney Parade Limited, a company wholly owned by Newport Rugby Football Club. It is located on the east bank of the River Usk in Newport city centre. The ground is on Rodney Road, a short walk from the city's central bus and railway stations via Newport Bridge or Newport City footbridge. There is no spectator car park at the ground but a number of multi-storey car parks are nearby. Rodney Parade is the home ground of rugby union clubs Newport RFC and the Newport Gwent Dragons regional team.It is also the home ground of Newport County football club. However, stadium capacity is reduced for football matches. 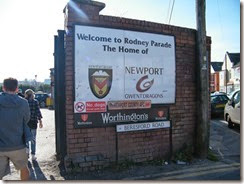 Rodney Parade has two covered stands: the two-tier Hazell Stand (west) and the Bisley Stand (east) which are along the touchlines of the pitch. The upper tier of the west stand is seated with 1,996 seats, including 40 Press seats and the lower tier is a standing terrace. The east stand is all-seated with a 2,526 capacity including 144 seats in 13 hospitality boxes, food/drink outlets and a gantry for television cameras. The cameras are therefore pointing westward and often show the sun setting over Newport city centre. The North Terrace is uncovered standing and adjoins the uncovered standing terrace on the west touchline alongside the west stand. The south end of the stadium houses players' changing rooms, a media centre and the small uncovered Sytner stand for away football fans. A large video screen was erected at the south end in December 2013. The ticket office, club shop and hospitality suite is located at the north end of the East Stand and accessed via Gate 4 on Grafton Road. To the north of the North Terrace is a floodlit grass training area. It is intended that this area will be developed as a 4G artificial turf training pitch. Further north, parallel to Grafton Road, is the Newport County office, the Rodney Hall function room and the rugby clubhouse/office facilities.

Leaving from Theale Services we headed to Thatcham to visit some of our old friends before making the journey down the A4 and then M4 towards Bristol and over the Severn Bridge towards Newport paying the £6.40 entry into Wales 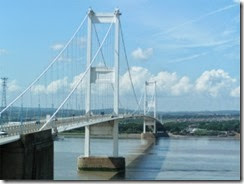 After parking up on a side street near the ground (it was a Sunday so no restrictions applied) we wandered up to the ground to collect our tickets and meet up with Shaun Smith again. We had a look in the Programme shop and managed to find a few Carlisle V Newport Programmes we needed for a friend. 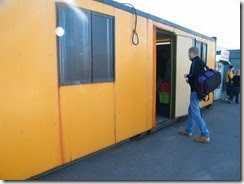 We entered the ground into the north Stand taking our place behind the goal for the action  Newport came from behind to earn a point against League Two strugglers Exeter City. After a poor first half the Grecians went in front after Newport centre-back Harry Worley headed into his own net. Within a minute County were level, Lee Minshull poking home after Exeter goalkeeper Arthur Krysiak had dropped the ball. 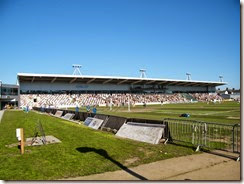 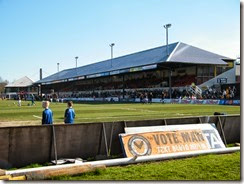 After the game it was time to transport Shaunee back up to Gateshead Via the M4,M5, M42 M1 A1 We stopped off at a service station near Tamworth to get something to eat before finally dropping him off in Gateshead not long after 10pm. We chatted along the way and in my true good form I never shut up (I Probably should have warned him). After that it was a pretty simple journey over the A69 towards Carlisle arriving back home not long after 11pm 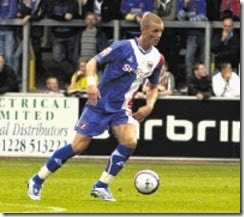 In the Newport side was Harry Worley who signed for Chelsea in 2005 from Stockport A tribunal set an initial transfer fee of £150,000 with further payments depending upon progress, He had a loan spell at Doncaster, then signed on loan for Carlisle United in 2007 playing only 1 game a 1-0 Victory over Cheltenham but was taken off at half time after picking up a Yellow card and really struggling against Cheltenham's attack. he was on the bench the following week but returned to Chelsea shortly after that. After that he joined Leicester City having loan spells at Luton and Crewe  On 14 July 2010, Worley parted company with Leicester by mutual consent, having failed to make more than a handful of first-team appearances during his two-year stint at the East Midlands club. He joined Oxford United on 22 July on a three-year deal after appearing on trial in two pre-season games against Scottish opposition. His first goal for United turned out to be the winner in a 2–1 away win against Port Vale at Vale Park on 12 March 2011.In June 2013 Worley joined Newport County. Worley made his debut for Newport County in the opening League Two match of the 2013–14 season on 3 August 2013 versus Accrington Stanley. Worley scored the opening goal after 24 minutes in the 4–1 win, the first goal for Newport County since their return to the Football League after a 25-year absence.

Well that is me back in the 92 club for the 2013-14 season but looking ahead to next season with either Luton or Cambridge coming up as Champions I will defiantly have another new ground next season as things stand Luton are on 86 Points with Second placed Cambridge on 73 but with a game in hand and then Grimsby in 3rd with 66 Points. As things stand Luton Need 8 more points for Promotion. 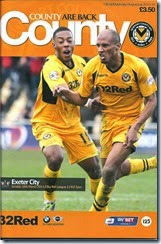 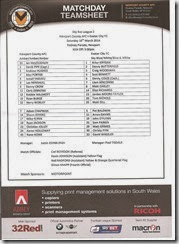