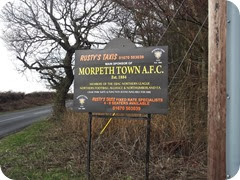 Morpeth Town A.F.C. is a football club based in Morpeth in Northumberland, England. Their home ground is Craik Park in Morpeth. In 1994 the club moved to Craik Park and again won the Northern Alliance title and with it promotion to the Northern League Division Two for the 1994–95 season. They named the stadium Craik Park after father and son W and R Craik who had served as club secretary between 1920 and 1985. The ground used to have a 400 metre cinder track surrounding the pitch but this has now gone. Craik Park is west of Morpeth town centre, just off the B6254 and a little over a mile from Morpeth Station. There’s no mention of the capacity but it must hold around 1000 with 100 in the stand. 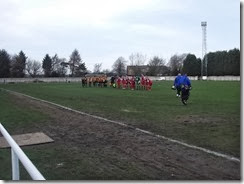 We set off from Carlisle around 1130 stopping off at Treasure Island soft play in Morpeth for my 10 year old son Daniel to run around and have some fun the £4 entry fee was well worth it. We made over way to the ground at around 1430 stopping off in the town centre to use a cash machine the town centre looks really nice . we came to the ground from the town centre so we came over Oldgate bridge up Curly Kews road which became Woodhill Drive and later Abbey Meadows. before turning left towards the B6254 road as you come to a set of tree’s you can see the floodlights and the entrance is in between a row of tree’s with the club house at the top of the hill, The Spectator entrance is around to the left. The ground is really open used to have a running track around it but this has now gone. 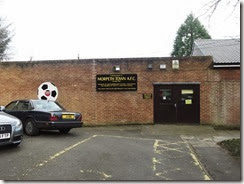 The first chance of the game fell to Sunderland RCA when a cross from the right found Gavin Barton who’s header was well wide. On 11 Minutes Morpeth took the lead when Stephen Forster raced clear beating Ross Preston to the ball before lacing the ball past the keeper into the net for 1-0. Morpeth went further ahead on 23 Minutes when Stephen Forster collected a ball over the top onto his chest just outside the area before turning and firing into the net with a excellent finish, at half time it was 2-0. 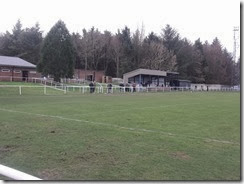 In the second half Sunderland started the brighter and despite having a goal disallowed on 58 Minutes and number of half chances fell behind when a ball over the top sent Substitute Matthew Wright clear and he was able to coolly finish into the far corner to make it 3-0 on 73 Minutes. Straight from the kick off Scott Swanston headed in a cross from the right to make it 4-0 on 74 Minutes. Gary Shields had a shot well saved on 77 Minutes for Sunderland before Morpeth wrapped things up in the 85th Minute when a bad back pass allowed Stephen Forster to nip in and knock the ball past the keeper before stopping the ball on the goal line and getting down on his knees to head it over the line and claim his hat trick 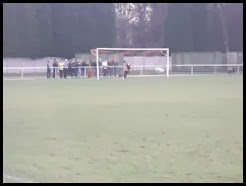 A good day out and a great game of football to boot. Sunderland will be disappointed as the score line flatters Morpeth a little but clinical finishing from the home side and some mistakes from Sunderland lead to their downfall. After the game we were straight home to Carlisle arriving back for 1825
Ex Carlisle watch
Sunderland RCA player/coach Steve Halliday Started number 6 for Sunderland I have already blogged on Halliday in blog number 223 whilst at Sunderland RCA last December Click here for Blog whilst I was at Sunderland RCA he was nice enough to sign my photo of him I had picked up at the Sunderland V Carlisle Fa Cup tie (which was displayed on the walls in the away end) the poor guy looked absolutely knackered and disappointed with the result but was graceful enough to sign it, the photo will be kept in with all my other Carlisle United Memorabilia. 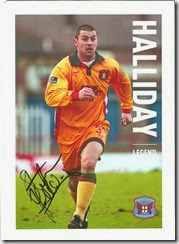 Now 24 Morpeth’s number 9 had been on trial for Carlisle as an 18 Year old back in 2008 , Playing 2 games one against Kilmarnock U19 scoring in the process in a 2-1 win then again against Burnley in a 4-2 Defeat the programme gives his former Clubs as Birmingham City Carlisle West Allotment Celtic Hebburn and Jarrow Roofing. No idea what happened to him, but today he was really lively took all three of his goals brilliantly and you kind of wonder what happened to his career and why he didn’t make it at a higher level. 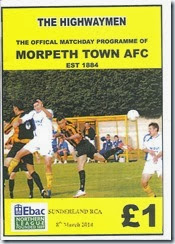