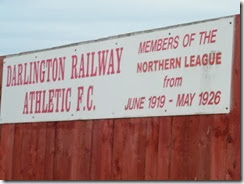 Darlington Railway Athletic F.C. is a football club based in Darlington, England. The club was formed shortly after the First World War and started out in the Darlington & District League. Little is known of the club in the early seasons but in 1919–20 the club joined the Northern League. They found the going tough and after finishing second bottom in the 1924–25 season they returned to the Darlington & District League. In 1992 the club hit financial trouble and folded, but was reformed by Martyn Jackson in 1993. The club won the Wearside Football League in 2005 which earned them promotion back to the Northern League, where in their first season they won another promotion to reach the Northern League Division One. However, they were relegated down again, and as of 2014 are in the Northern League Division Two. There isn’t much to the ground open sides with a seated stand behind one end with the standing terrace and changing rooms at the other end the club house is in the corner and well worth a visit. 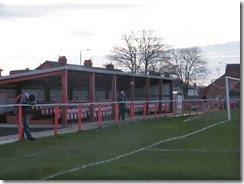 They Journey from Stokesley to Darlington took a little over half an hour after a quick stop at the MacDonald's and a cash machine. Parking up on a side street across the road from the ground. I was starting to lag a little by the last game the early start combined with the long day meant time was beginning to catch up with me but the game was entertaining so I managed to stay awake. 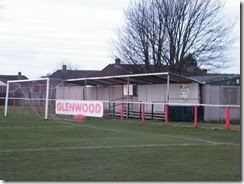 Thornaby took the lead when Bythway headed a free kick the lead was soon doubled by Melvin tapped in at the back post to make it 2-0 Darlington got back into the game with a stunning goal. Allison curled a wicked effort into the top right corner from the edge of the box leaving the goalkeeper stranded and make it 2-1. In the Second half a sustained period of pressure from Darlington failed to find a goal, Thornaby then Caught Darlington on the break and Woodhouse was able to race clear to slot home for 3-1. Allison then got his second to make it 3-2 but Thornaby were able to hang on and claim a valuable away win.

We set off back home for Cumbria taking to journey back over the A66 arriving home from around 10:00 slightly knackered but a very enjoyable day never the less. A well organised hop although as always the crowds tend to drop off after the first game. 3 good games off football as well will defo be at some of the easter hop more likely the Saturday and Sunday 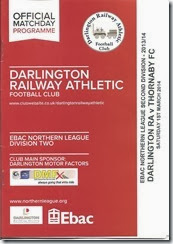 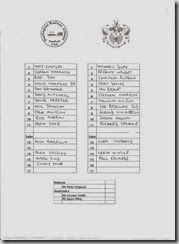