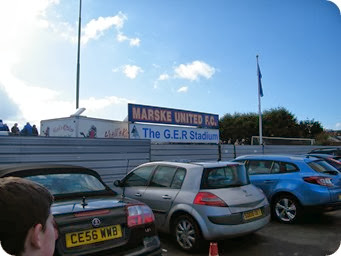 Marske United F.C. is an English football club based in Marske-by-the-Sea, near Redcar in North Yorkshire. The club are currently members of Division One of the Northern League and play at the GER Stadium. The club was established in 1956 and initially played in local leagues until joining the Teesside League in 1976. They won the league in 1980–81 and 1983–84 and in 1985 were promoted to Wearside League in 1985, which they won in 1994–95. The following season they finished second and were promoted to Division Two of the Northern League. In their first season in Division Two they finished third, and were promoted to Division One, where they remained until being relegated at the end of the 2003–04 season. They returned to Division One after finishing third in 2010–11. There Record Attendance is 1,489 vs Darlington 1883, Northern League, 2 February 2013. This Season the club made it all the way to the Fa Cup 4th Qualifying Round beating Consett, Hebburn, Albion Sports, Frickley Athletic, and Halesowen Town before losing to Southport Narrowly missing out on an historic entry into the first round. Situated on the North Sea coast between Redcar and Saltburn, Marske-by-the-Sea is one of East Cleveland’s oldest and prettiest villages. The main stand has seating for 167 fans, with the remainder of the 2,500 capacity made up of hard standing on all four sides of the ground. There was a social club outside the ground which has a large TV Screen showing Sky Sports. 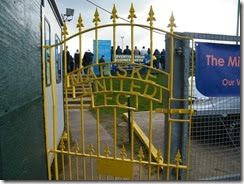 We made our way over from Carlisle parking up on a nearby street this was the first game of the Northern League groundhop weekend with 3 games scheduled over the 1 day so the KO was 11am Entry was £15 for the 3 Games Including Programmes. We arrived at around 1050 and was able to walk in just in time for KO The large crowd meant an entertaining game was expected. 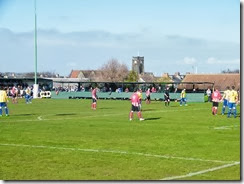 Guisborough took the lead when a through ball sent top goal scorer though on goal he coolly rounded the keeper before slotting in from an tight angle an excellent finish. Shorty after that tensions flared up between the Marske Left back O Sullivan and Guisborough goal scorer Johnson O Sullivan later kicking out in front of the linesman who had a simple job of pointing it out to the ref who was quick to dismiss the defender. On 63 Mins Roberts Converted a header from a corner to make it 2-0, On 86 Min’s the same player made it 3-0 with a volley. In the last minutes of the game Johnson went through on goal again this time choosing to smash the ball past the keeper to make it 4-0 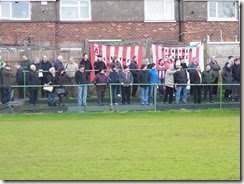 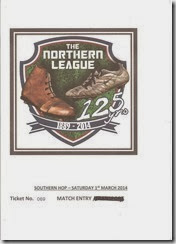 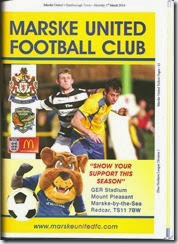