Manchester United U21 V Sunderland U21 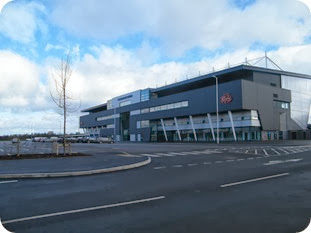 AJ Bell Stadium (formerly known as Salford City Stadium)is a rugby stadium in Barton-upon-Irwell, Salford, England. It was built to replace Salford rugby league club's ground at The Willows for the start of the 2012 season. Sale Sharks rugby union club have also played at the stadium since the start of the 2012–13 season. From the start of the 2013–14 season, Manchester United have announced their under-21 team will be playing all their home games at the stadium. The stadium also hosted England women's Euro 2013 qualifying match against the Netherlands on 17 June 2012.

In 2005, Salford City Council approved plans for the Reds to move from the Willows to the brownfield site at Barton. The stadium was originally to be developed by Red City Developments, with construction to be complete for the start of the 2009 season. However, RCD went into administration in July 2008. Salford City Council formed a joint venture company with Peel Group to develop and deliver the £16 million stadium,which is part of the a £26 million development close to the Manchester Ship Canal and the M60 motorway. Planning permission was granted in March 2010 for a 15,000-capacity stadium. On 13 September 2013, it was announced that investment platform AJ Bell had secured a nine-year stadium naming rights partnership with Sale Sharks Rugby Club. The deal will see Salford City Stadium re-branded and re-named AJ Bell Stadium. AJ Bell are also sponsors of Salford Red Devils.

Initially, the stadium can accommodate a 12,000 crowd, but could be extended to hold up to 20,000 spectators. The stadium has areas designated for standing supporters 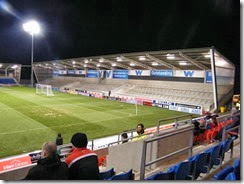 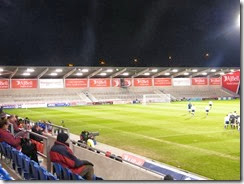 There are four stands:

The seats in the West and East Stands are red (for Salford) and blue (for Sale). 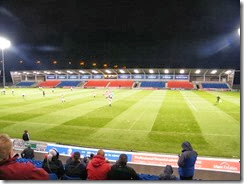 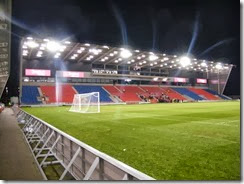 The development also includes offices, player facilities, concessions, community resources and two community outdoor sport pitches, a gym and the club shop which is shared by both the Red Devils and the Sharks. The Record Attendance is 9,783 (Sale Sharks v London Wasps) 4th May 2013.

The Highest Attendance I could find for a Football Match is 5,505 for the England Women's Euro 2013 Qualifier a blog from the game written by fellow blogger THE606POW can be found here

This was Man U21’s last scheduled game of the season at the Stadium so was glad to tick it off as this is one of 3 Stadiums I pass every week day on my regular run to East Midlands Airport with the other 2 being the Reebok Stadium and The Britannia Stadium  (on the way down I usually pass this ground as I have to go via the Manchester Depot) You can easily see it from the Barton flyover and I have been waiting for a chance to see a football match at this ground for some time. With it being my week off I decided to make the Journey down to watch it. The match itself wasn't great but at £3 I can’t complain you can read a report here The 7pm KO meant I was back in Carlisle by 2245. 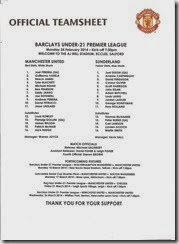 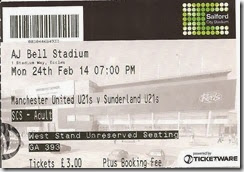